Peter Chiarelli is doing a fine job of adding veteran depth wingers since his arrival. Patrick Maroon, Zack Kassian and now Kris Versteeg (if he makes it) give the Oilers an established look we haven’t seen in a decade. As a matter of fact, the addition of Versteeg could mean the Oilers run with a fairly veteran group up front.

I like this lineup a lot. Veterans up and down the wings, and a pretty inviting spot for Nail Yakupov. Jesse Puljujarvi can still push his way into the lineup but it would be very difficult—and that is a good thing. Additionally, adding Versteeg (and Gryba, as I have here) give the Oilers a veteran look we haven’t seen here in a long time (for proof, have a look at the opening night lineups since 2005). Versteeg can help on the power play, too. 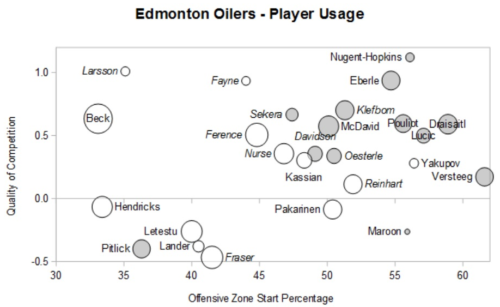 Rob Vollman (whose book is ready, I will have him on the Lowdown Thursday for a two-hour launch!) provided me with a three-year photo of the Oilers (and new hires). As you can see, Kris Versteeg has been playing in a good offensive spot, and has provided excellent possession and reasonable results. I would describe him as an effective complementary forward—and getting him on a PTO was a fantastic get. If he passes the physical, suspect Edmonton signs him. I wouldn’t be at all surprised to find out the range of a contract have already been discussed.

Both Finns are going to be on the bubble in training camp, in my opinion. Agree? The only men who are locks on the right side from my pov? Eberle and Kassian. We should talk about Versteeg’s addition and its impact on Nail Yakupov, a subject I broached here.