I have long railed against the idea of Edmonton’s AHL team and their tendency to give feature roles and handsome minutes to older (non-prospect) players. Today, I got a little help.

Why would I do that? Well, from an @Lowetide post, I was curious how Bakersfield used their forwards. pic.twitter.com/NaLNdgVoZA

Fascinating. The blue bars are AHL, the Barons line is Edmonton’s kids and their usage in terms of age. Two things stand out:

The first portion of that graph is long established, only teams who are clearly looking to contend and have no reasonable prospect options give that much playing time to the 30+ set. The second part adds to the mystery, as the heart of the current Condors club is in the 21-24 age group. In all sincerity the Oilers should be giving extended play to the Khaira’s and the Chase’s, and not the Matt Ford’s and Ryan Hamilton’s of the world. And you know what else? It is probably a bad idea to give playing time to Marco Roy and Josh Winquist—at the expense of your own prospects—if there is no plan to sign them. Thoughts?

SAY IT WITH ME: TIME ON ICE!

Here is a list of AHL prospects who were 20 last season, playing in their first AHL seasons and who played 38 or more games: 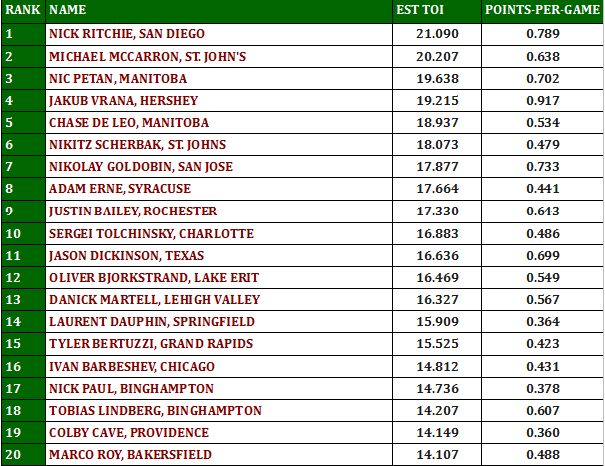 In terms of TOI, Roy ranks No. 20 among AHL prospects who were 20-year olds and playing in their first NA pro season (I may have missed one or two, apologies if that is the case). Here is the rest of the group of 34: 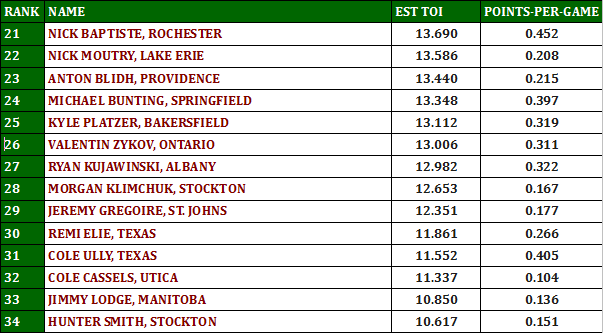 So. The Oilers have two of the 34 players who are 20 and playing in their first AHL season (Roy, Platzer) and one of them has no NHL contract. The other guy, who is under contract and the best 20-year old prospect in the organization at the AHL level, played an estimated 13 minutes a night. Seriously.

However, let’s ask this question: Was Platzer overwhelmed? Would Edmonton be wasting TOI by giving more minutes to Platzer? The best way (imo) to grind down on these numbers is estimated prime points-per-60:

I want to examine the 21-24 year old group from last season’s Condors in the coming days to find out if the imbalance showed by WheatnOil above impacted specific players. I also want to find out of Roy/Winquist and other AHL-only prospects are robbing legit Oilers prospect of earned at-bats.

In the case of Kyle Platzer—based on this quick look—I don’t think we can clearly say he made a strong case for additional playing time.

I won’t say it again after this, but for me there is real evidence the Oilers should have signed Marco Roy. Parkatti’s draft model identified a pretty good hockey player.