Our man WheatnOil moved the conversation forward this week in regard to the Oilers usage of prospects. We discussed the 20-year olds a day ago, let’s drill down on the 21-24 group today.

Why would I do that? Well, from an @Lowetide post, I was curious how Bakersfield used their forwards. pic.twitter.com/NaLNdgVoZA

WheatnOil’s graph shows the Condors exceeded normal when deploying the 20-21 year old kids (there were a lot on the roster, that probably explains some of it) and then shows Bakersfield on with lower than average totals through the late 20s. This is a strange graph, leading to the question: Who among Edmonton’s 21-24 year old forward prospects is not receiving their due? 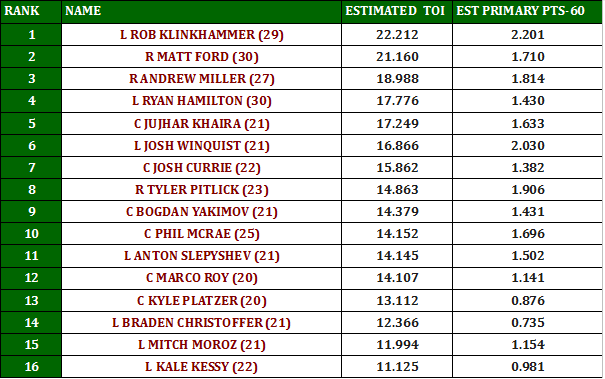 All of this information is via Prospect-Stats, a truly brilliant site. The top four Condors forwards are older players, no longer prospects. I object to this, believe it is a very poor idea and honestly represents truly bad decision making. That’s not what we are looking for today, my opinion is established. What we are looking for today is evidence that the coaching staff is pushing veteran forwards ahead of prospects who could become productive NHL players.

I decided that in order for us to reasonably consider someone ‘robbed’ of playing time, we would need to find someone who played less than 18 minutes a night and showed an ability to score well (I am using Primary points-per-estimated-60).

RANKED BY ESTIMATED PRIMARY POINTS PER 60 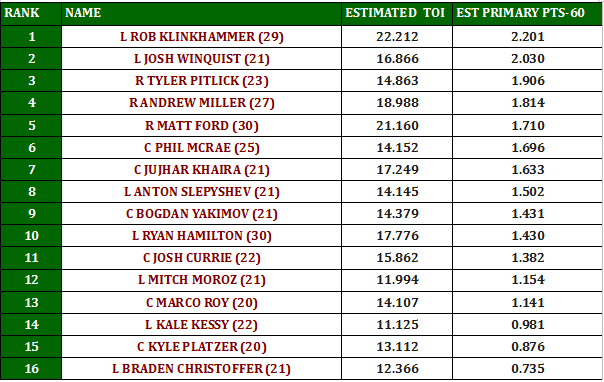 I think there is some evidence here, allow me to explain. The weakest link among veterans in the primary points-per-60 category is Ryan Hamilton, who clocks in at 1.430 primary points-per-60. That is No. 10 among 16 forwards, and there are a whack of prospects who performed better than the veteran LW at this discipline. I would also point to Matt Ford, who played an estimated four minutes more per night than Jujhar Khaira with similar production.

PLAYERS WHO SHOULD HAVE RECEIVED MORE OPPORTUNITY

Final note: I have listed five players here and that is a pretty significant number. Let’s not get ahead of ourselves, though. As much as I believe absolutely that the Oilers have been poor in development, it is also wildly unfair to suggest there are five sure things in the AHL that Gerry Fleming refused to play. Somewhere in the middle there is the sweet spot. There is a story here that someone needs to tell Keith Gretzky. Who will it be?

The author didn‘t add any Information to his profile yet.
Related Posts
The Lost Highway