I believe Jesse Puljuarvi will be in the Oilers lineup by Christmas, and that he could break with the big club in time for opening night with a brilliant training camp. The journey begins tomorrow.

I had 27 on my guess list a year ago, including all 26 who were on the actual list (I had Brossoit mistakenly going to camp). The first Oilers Young Stars roster boasted seven legit NHL players—that is a strong total. As for the list above, Scott Allen is 26 so may not appear (despite having just one pro season). I think there are three men who have a real chance to play in the NHL this year: Jesse Puljujuarvi, Drake Caggiula and Matt Benning. 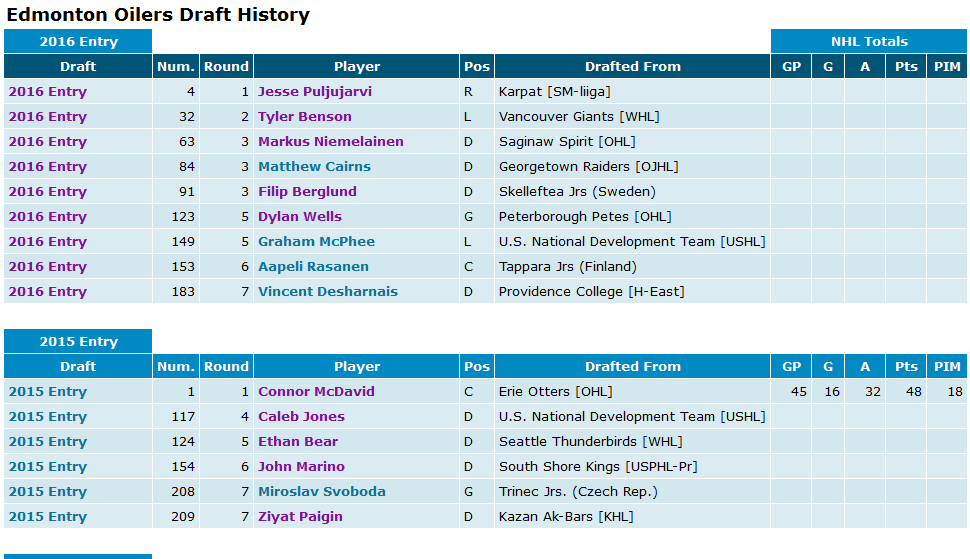 Craig Button has his 2017 first round out and it is worth the read. The No. 2 ranked player is a righty Swede blue, but the Oilers should be nowhere near that pick if things go according to Hoyle. We are NOT going to discuss the draft this fall and early winter, because the Oilers are going to be somewhere near the pennant race. Right?

One thing that we should begin talking about—especially if the Oilers can grab a second-round pick and have another strong draft in 2017—is the Chiarelli/Green draft cluster. Absolutely fell into Connor McDavid and Jesse Puljujarvi, but the arrows on the later picks looks good so far and that is an interesting trend. We can’t assume all of Jones, Bear and Paigin make it to the NHL and have productive careers, but even if one makes it that should be considered a win.

I have deliberately stayed out of the conversation about McDavid as captain, mostly because there is simply no way to know the dynamic inside the Oilers room. One thing I will say: Old people are often helpful, as experience can represent wisdom—but that is not always the case. When Bobby Clarke says players need four or five years, that may be exactly right, but I always raise an eyebrow when someone from a long distant era talks about what players are all about today. I am not saying don’t trust anyone over 30, but certainly a good idea to be aware that bias exists in all people.

10 this morning, TSN1260. A crazy morning in sports, scheduled to appear:

Keep Your Eyes on the Road, Your Hands Upon the Wheel

POWER AND THE GLORY