I have maintained all summer that the wise thing to do is send Jesse Puljujarvi to Bakersfield for at least 20 games. The script is already written: Place Kris Versteeg on RW along with Jordan Eberle, Nail Yakupov and Zack Kassian, run those four (and others) whilst the Jolly Finn Giant announces his presence with authority to dazed and confused AHL goalies. That is my position.

In reality, I don’t think he gets 20 games in the AHL, nor 15, nor 10, nor 5. Jesse Puljujarvi is on this train, and this train is bound for glory. That last guy Edmonton drafted in the top 10 overall who was slow played? Steve Kelly.

This is using Scott Cullen’s fantasy numbers. He also included Kris Versteeg on his list, suspect that RW battle is going to be interesting in training camp and we may not see the winner crowned until Christmas or later. We do know the winner’s name, though. It’s just a matter of time.

CULT OF HOCKEY VERSUS LOWETIDE 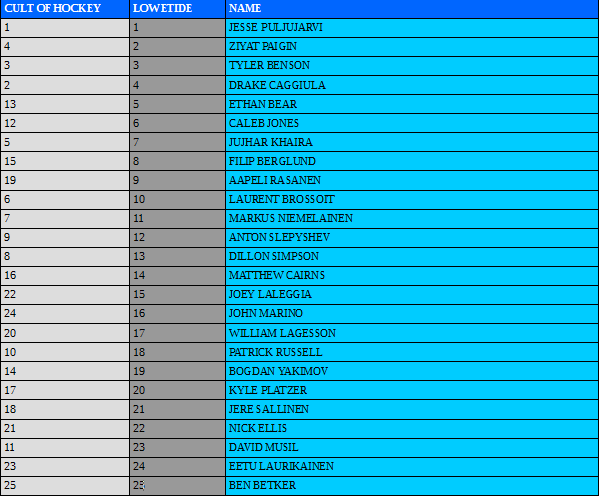 My list includes all kinds of players the CofH list does not (my list is here), to the point where it becomes difficult to really see the uniqueness of each list. What I have done here is take the 25 names from the Cult and then ranked those names based on my original list. Some notes:

This is a fun exercise, Bruce will pop in this morning on the Lowdown and we will discuss the list and other items (like Puljujarvi and his possible role on the Oilers this year).

How many of these free-agent signings were useful? I think we can all agree that the Benoit Pouliot signing was very astute, and I would argue that Boyd Gordon and Mark Fayne have had their uses while also offering challenges in term and ability to move the contract. I would suggest, respectively, this reflects an inexperienced general manager who was not able to secure acceptable value on investment in the free agent market.

We have less track than the Mact signings, but the big money additions (Sekera, Lucic) are batting higher in the order and were acquired at a younger age than the MacT group. Now, Connor McDavid arrived before any of these signings and that changed everything (I know you will agree). As for the rest, I liked (and like) the Letestu addition and am interested in Beck as an option. As I have mentioned more than once, Gustavsson and Fraser were curious choices to my eye but neither man came at a high cost.

The author didn‘t add any Information to his profile yet.
Related Posts
NO. 2 PROSPECT (winter 2014): DARNELL NURSE

164 Responses to "GROW SOME FUNK OF YOUR OWN"