ALL MY OIL KINGS!

As it stands now, the Edmonton Oil Kings 2010-14 have not exactly set the pro hockey world on fire. Curtis Lazar, Mark Pysyk, Griffin Reinhart, Laurent Brossoit, Henrik Samuelsson, Mitchell Moroz and many more have stopped short of making an NHL impact. It is fairly stark considering how famous these teams became leading up to the 2014 Memorial Cup victory. Here are the current NHL games played for Oil Kings grads:

Definitely an Oilers theme there, and that doesn’t include Mitchell Moroz, Travis Ewanyk and various other draft picks who ended up in one of the Oil organizations (or both). Could you stand another?

Whenever I am looked for a quick and dirty (stop it) way of assessing NHL defenders, I go to Stats.HockeyAnalysis.com and run the CF% RelTM chart for 500+ minutes. Pysyk, a year ago, had a fine number and hung around in a good good range. Where was he playing those minutes? Let’s head for the Sledgehammer. 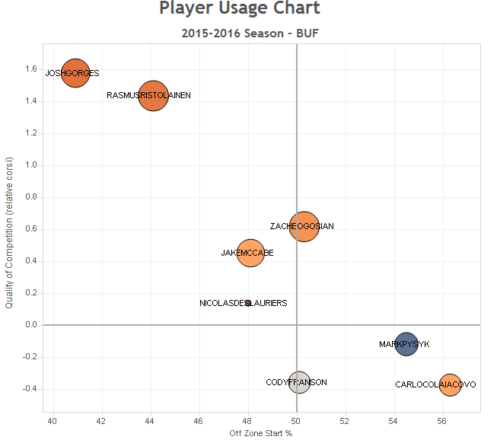 There we are, Pysyk performing well in the soft minutes portion of the Vollman. If a player is getting those minutes, you would like to see some good numbers are Pysyk does very well in the possession stats. His offense at even strength (0.61 5×5 points-per-60) is no screaming hell—a little better than Brandon Davidson managed a year ago.

I was talking to Darcy McLeod today and Pysyk came up as a possible acquisition. He was traded to Florida earlier this summer (I wrote about acquiring him here, he was traded a week later) and we are here. Question: If the acquisition cost for Pysyk (Panthers gave up Dmitri Kulikov to get him) isn’t excruciating, are you interested?

Filip Berglund got into some SHL action in Sweden yesterday, and we received an update from our friend Swedish Poster:

As always, thanks so much to Swedish Poster. I will have some information on tomorrow morning’s post on some of the junior and Euro kids, but it is worth nothing that Dylan Wells had a nice debut.

THE CARPENTER ABOUT TO FINISH THE JOB

THE HEAT IS ON!