The Edmonton Oilers won a game against the St. Louis Blues last night, in October, while still in contention for a playoff spot. It was not a perfect effort, but a win is a win is a win—and they are officially rolling in October. Rare air, ladies. Call out the instigators, because there’s something in the air.

This was a big win for the organization, seriously the momentum at the beginning of the season for this team has been wretched for many years. I have suggested 5-2-1 would be a good October, but with this start it is probably fair to hope for more.

Interesting night for things other than Corsi, as the HD and DFF had the Oilers tied or ahead, while the Corsi numbers favored the Blues by a wide margin. G and friends have been doing great work and this kind of distance (and being on the right side of the result) is a good arrow for the measure. Now, we need seasons of evidence that DFF is a better predictor of success, but small victories are big steps. I remain a stubborn Corsi man, but look forward to the journey ahead.

I get emails from folks who worry that the Oilers will do well and Taylor Hall will be blamed for it. Seriously. I feel very strongly this team needed (and needs) better balance, with a backup goalie, a RH puck moving D and a Pisani added. Hard to make any argument and be heard this morning, the Edmonton Oilers have a mitt full of wins after just five games.

You know what stills the thunder? Winning. Winning hockey games makes it hard for me to argue that Peter Chiarelli stopped before balance, that the Jonas Gustavsson bet was not a good one, that Kris Russell is shy in terms of addressing need. We are very early in the season, and it seems silly to suggest storms never last after a decade plus, but the Oilers are 4-1-0 this morning. To the victor goes the spoils.

That said, I remain convinced the Hall-for-Larsson trade was not full value and am not going to surrender on the need for more balance. Chiarelli and McLellan may have found a Pisani (Tyler Pitlick does not have great possession numbers but it is early and the young man is scoring), but the defense needs a hammer and the goaltending is thin on depth.

The early winning streak does give me hope that the team will be aggressive in-season if these issues hurt the team’s chances. The possession totals are still an issue, but at 4-1-0 it is more difficult today to rage and be heard. Winning changes everything.

Check this out >> Sallinen scores his first in North America and then @GriffinReinhart starts throwing bombs! #Condorstown pic.twitter.com/nPUvYU4JpD

This video is a sign that things are getting through to the prospects. Sallinen scores, gets leveled by Scott Kosmachuk and then takes several rights from Griffin Reinhart. Oilers want aggressive defensemen—at the blue line, along the wall and after the whistle. 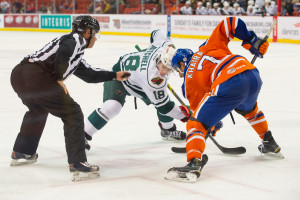 Jujhar Khaira is emerging as a strong candidate for early recall on the basis of his early season production for the Bakersfield Condors. He is 2gp, 3-1-4 so far and with Jesse Puljujarvi possibly heading to the minors (Edmonton is winning with the young Finn in the pressbox) we could see it happen. Matt Benning is 2gp, 1-1-2 and we might also see a recall (with Ben Betker sent back) before the minor league team heads to America.

At 10 this morning, TSN1260. We kick off an interesting weekend and a fantastic evening in sports with: