The Edmonton Oilers have a three-game trip through the Western Conference this week, and could come home 9-9-1—and if that happens the fan base might embark on another ‘trailers for Kingsway’ crusade. On the other hand, a 2-1-0 trip has the town team at 11-7-1 and posting nine points in 10 November games. Can this team win two in California?

YOU CAN CHECK OUT ANY TIME YOU WANT, YEAR OVER YEAR

November has 30 days and 15 games, our line in the sand for the Oilers is 15 points. Currently the team is on pace to post just 11 points, meaning that on the current November pace the club’s record will be (something like) 11-10-3 (25 points in 24 games). Disappointing results after such a terrific start, lack of scoring depth has us here. G17 last year was a loss to the Arizona Coyotes 4-1, OEL and Tobias Reider playing well for the home side.

These are interesting lines and I do wonder if we see some shuffle on this trip. Some combination of Nuge, Leon and Lucic has to start posting strong possession numbers and creating boxcars at 5×5.

Moving Eberle to the Nuge line (with Poo) is probably the most reasonable bet, these three have had success in the past. Trading Taylor Hall meant the team is down to one driver (97) and it is imperative McLellan find a second line that can wheel. Leon on RW might also work, but then you are dealing with a grim landscape on lines three and four.

Something like that. It is perhaps too much for Pitlick, but at this point I think Todd McLellan may just want to get another line going in hopes of squeezing out sparks. We wait .

I published the 5×5/60 numbers yesterday, had some questions about differences in totals. This is the list from NHL.com, and that includes empty-net goals and various other stray even-strength moments. Now, one of the things that you should also know is the power-play totals—because some of the struggling 5×5 performers are playing well with the man advantage: 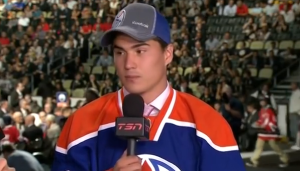 I hope the young man finds a place, but really Hitchock is not the first coach I would have picked for him. Nail is scoring (1.83 5×5/60) enough to stay in the lineup but the team is struggling compared to its own expectations. NHL teams always need some firepower and Yak has some nice things. Soldier on, young man.

Completely healthy approach, good to see the young man moving on with his life. I think a lot of Oilers fans have moved with him, ala Peyton Manning to the Broncos. I did not make that emotional journey, but do understand why people have trouble taking a next step—whatever that may be for them. I think Taylor Hall is going set the New Jersey swamps on fire, and hope he wins a Stanley there.

UNTIL WE MEET AGAIN

Today on the show, we kick some butt and take some names. Scheduled to appear: