When the fourth Oilers goal went in last night, I was reminded of that Casey Stengel thought about game results that are preordained yay or nay. Stengel said (in the 154-game MLB) there are 50 games you are going to win no matter what, and 50 you are going to lose the same way. Winning the pennant depends on what you do in those 54 games remaining. The math of hockey is halved, but the song remains the same. Last night, the hockey Gods brought gifts galore. And it was good.

Edmonton now has 10 wins on the season, just ahead of G20. In the last six seasons (excluding the lockout), the Oilers won 27, 25, 32, 29, 24 and 31 games.  The last time they won 40 games, it was 2007-08, a season that now shines like a beacon compared to what has come since. Craig MacTavish could coach him some 5×5. This Oilers team needs to let the horses run, especially the captain. Connor McDavid is so good it hurts. 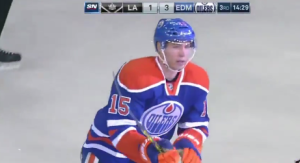 I have written on Tyler Pitlick so much since 2010, going back and looking at past posts kind of feels like returning to the scene of the crime. Picture the most meandering road you have ever experienced, and that begins to describe his pro career. Even before he turned pro, Pitlick jumped from college to junior so we had the damndest time figuring out progress. For what it’s worth, Pitlick’s surge this season is beginning to resemble a blast from the past.

Pisani turned 26 on December 27 of his rookie year, Pitlick turned 25 November 1 of this season. Pisani sent Daniel Cleary down the depth chart with his fine play, Pitlick is sealing off several names (what in hell would Iiro Pakarinen have to do to get his job back) with this early season run. I have been asked dozens of times this fall if Pitlick is the new Pisani, and my answer is maybe. Why so vague? Well, the point of Pisani is that he becamse the Pisani—I don’t recall a giant rave about his two-way game before we saw him in Edmonton.

By season two Pisani was edging toward a minute on both PP and PK and after the lockout he emerged as an all rounder and a mentor. This could be Pitlick’s future, but we cannot know for sure at this time.

Todd McLellan is riding McDavid and that makes sense to me. That said, Ryan Nugent-Hopkins handling by the coach appears to be heading in the opposite direction this year. Let’s compare year over year:

McLellan has Letestu, Lander and Nuge as his main PK men (Hendricks replaced Lander last night and will as time goes by) and for me that is excellent deployment. Nuge is a tremendous forechecker and can disrupt things very well—Dave Keon was also a brilliant PK man. There is a reduction in playing time, and I wonder if the coach worries about the Nuge wearing down this time of year. Either way, it is an interesting wrinkle in deployment this season.

Travis Yost was on SSE a few weeks ago and was convincing in his argument that Edmonton could make the playoffs with McDavid being McDavid and Talbot playing as he did last night. It is not a good long term recipe, but the Oilers are in a good spot after 19 games because of it.

I like to check opposition coaching decisions after the game in regard to who is facing McDavid. The numbers last night didn’t jive for me:

The interesting thing for me is that Ruff seems to have checked down from Oduya—Klingberg at some point, keeping Klingberg and Benn. Is that right? And if so, theories?

TOYS IN THE ATTIC

RE 15-16 TODD MCLELLAN: WHAT AM I DOING HERE?
PUSH THE RIVER

TODD NELSON CAN LEAP BUILDINGS IN A SINGLE BOUND