I have reached the conclusion that this Oilers season must be viewed as a cliff hanger—every game. Oilers fans, this season, demand that every game reach G7 SCF fever pitch. As a group, we are likely to be a grease spot in the Rexall parking lot (because the team has moved on, but we have not) by March, but the heart wants what it wants. My own personal view of this season is a little more relaxed, to be honest. There is clearly progress, but there are also jobs being won and lost—and some of the men emerging right now could be here for a decade or more. We are watching the foundation being built, right here, right now.

NICK OF TIME, YEAR OVER YEAR

G23 a year ago saw the Oilers saw the Oilers lose on the road to the Detroit Red Wings in OT. An unassisted goal by Iiro Pakarinen got Edmonton the point—it was Pakarinen’s second of the game. This afternoon, the Oilers have a chance to get back to even for November, and keep the 15 points in 15 games hope alive. It will not be easy, the Coyotes have special powers, causing the Oilers and their fans to get sleepy shortly after the face off. Arizona has copped a point in 24 straight games against Edmonton, a stat that Oilers fans are tired of hearing about. Does it end today? 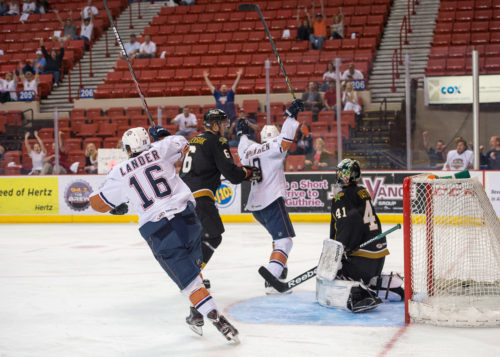 It took Anton Lander some time to get to Bakersfield, but he posted 1-1-2 in his first game as a Condor last night. Bakersfield badly needs the offense, and AL stepped in on a line with Taylor Beck and Ryan Hamilton to make a difference. Jujhar Khaira is now odd man out, it will be interesting to see if the coaching staff can cobble together a second scoring line with JJ as the pivot. Even with the college men down there, real talent is in short supply among the forwards.

Talbot is the second most important player on this team currently, and his performances have been impressive. He ranks No. 11 among goalies in save percentage (.921), No. 14 in even strength (.920) and No. 3 in PP SP (.932). Connor McDavid is going to win team MVP, but Talbot will deserve some votes, too.

A funny thing is happening in Bakersfield. David Musil is posting crooked numbers. Now, I cannot tell you this is a new gear, because Musil’s style does not lend itself to the offensive game. Still, numbers be numbers and here they are (even strength).

An impressive leap by Musil and we will monitor. In prospect terms, it would be better news if Griffin Reinhart, Jordan Oesterle or Joey Laleggia were experiencing a sharp spike in even-strength points, but we are here and Musil is showing a pulse. Expansion years are a good time to take a step forward, maybe Musil ends up in the LV organization.

We haven’t heard much lately, suspect that is a bad sign. Davidson would be inside my top 4D if healthy, but the gathering wind of injury is having some major impact. Is it enough to keep him out most of this year? Will that impact Edmonton’s and (and LV’s) expansion decisions? Probably.

Look, the Oilers should win today, but they could lose too. I encourage you to take a wider view of this season now, to sweat less about individual games and look at things week to week or even month to month. If Edmonton were to lose to Arizona today and Toronto on Tuesday, I can only imagine what comments sections on blogs would look like.

It doesn’t have to be this way. The Oilers are 12-8-2 and have already had a 5-game losing streak. I sometimes wonder if people are worried about another one or hoping for it. It is a very weird season for this old man to observe a fan base that seems to have fractured along some truly bizarre lines. You all take care of yourself. Please.