On the night of November 30, 2013, Laurent Brossoit stopped 30 of 31 shots and backstopped the Oklahoma City Barons to a win. Since that night, he has been the great goalie hope for an organization—and there’s good reason to believe—that has consistently shown an inability to grow their own goalies. In over 100 AHL games as a member of the Edmonton organization, Brossoit has supplied consistent play in a position of extreme weakness. We are likely less than a full year away from his NHL ascension.

There are two actual NHL players who have been ranked No. 12 over the last 10 years, Jeff Petry and Devan Dubnyk. I always slow play goalies (Brossoit ranked No. 6 on the most recent Cult of Hockey rankings) and Petry was ranked this low in 2010 because the prospect list that Christmas was insane (Hall, Eberle, Paajarvi, Dubnyk, etc). I think Brossoit and Khaira are the most promising names since Petry was here in 2010. 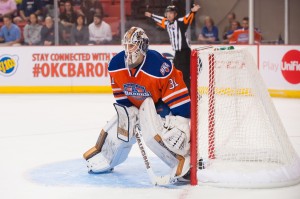 BROSSOIT AS AN AHL PLAYER

Brossoit has been very consistent since becoming the starter for Edmonton’s AHL team. I think this season is probably a trying one, the Oilers don’t have much going on offensively in the minors. One new factor: Backup goalie Nick Ellis has a .930 save percentage and ranks No. 5 among goalies in the discipline currently (in just five games).

Issue was never in doubt, but don't overlook @LBrossoit and his 36 stops tonight. The form we've grown accustomed to. Nice win.

The Oilers don’t have to make a decision on Brossoit this season. The club also has no obvious replacement (aside from Brossoit) for backup duties once Jonas Gustavsson’s contract expires.

Edmonton has not chosen a goalie inside the top 100 overall in any of the seasons since Brossoit was acquired, and other goalie prospects in the system have their starts scheduled around down time for him. Unless I have badly misread the situation, Nick Ellis is the first potential rival for the No. 1 goalie spot since Brossoit became an Oiler. They like him, and I bet you money at least one manager is wondering why he isn’t the backup this season. I wonder a little, too.