Google ‘Griffin Reinhart’ or search on twitter and you are likely to find endless negative passages about him from Oilers fans. In a real way, Reinhart never had a chance to be a popular Oiler, certainly not at the level he had been as an Oil King. And of course, the Leftorium made acquiring GR a strange item in the first place.

None of those items has one thing to do with this ranking. Griffin Reinhart is falling down these rankings because, despite being the No. 4 overall pick in 2012, he has not impressed enough in pro hockey to establish himself as a strong NHL option. Approaching the halfway point of the final year of his entry-level deal, Griffin Reinhart appears to be at a crossroads.

If the author of the rankings is doing his job right, this is what a rankings list should look like at No. 13. The only actual NHL player is Tobias Rieder, and the rest fell away before establishing themselves as NHL players. Griffin Reinhart has played in 37 NHL games already, and will likely have graduated by the summer list. 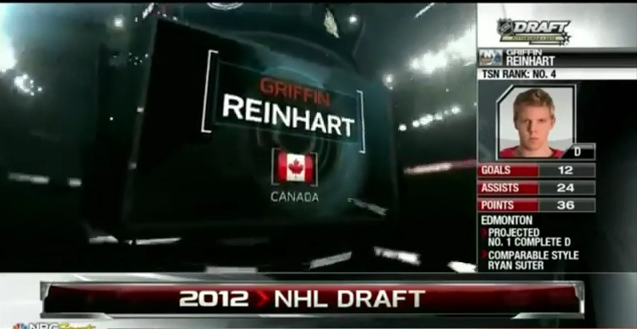 The reason he was drafted No. 4 overall, and the reason Edmonton traded for him, are contained in the words of Megan Richardson above. We are not seeing those skills in evidence enough to project him into the NHL as a regular, but last season he wasn’t that far behind Darnell Nurse:

If you glanced at those numbers without knowing the names (and the organization’s devotion to said players), it would be reasonable to walk away thinking these prospects are fairly close together. Their projected futures based on these numbers should be somewhat similar, but in the months since the end of the 2015-16 season, things have changed.

REINHART IN THE AHL

These are the Reinhart AHL numbers, I can tell you the NHLEs going back to junior are not terribly different than his first two pro seasons. His WHL NHLEs were 12.4, 13.74, 10.88 and 10.33. His AHL NHLEs are 14.37 and 12.84. We knew on his draft day (as above scouting reports show) that a lot of his value would come from his defensive play, and the offense over (now) six seasons plus five games confirms it. Breaking news: We have this side of his skill set surrounded.

You may not hold a shutdown defender in high value, but there is zero doubt Reinhart was a good one in junior. His inability to transport those skills to the pro level are the reason we are discussing this player so late in the process this year.

As per Gerry Fleming in @OilersNow. Griffin Reinhart is in Edmonton getting his back looked at by Dr. Naidu.

All of the rest of this post is window dressing. The McLellan quote is the money here, and there is no real way to dance around it. Combined with Bob’s measured tweet that doesn’t mention Kris Russell by name, we get real insight into what the team was thinking entering and exiting training camp. Griffin Reinhart may have another real chance with the Edmonton Oilers and he also may not have one left. This is reality.

Griffin Reinhart’s game at the NHL level was not a far distance from that of Darnell Nurse a year ago, when both men struggled in the NHL. I spoke to Tom Lynn (a player agent and former NHL general manager and assistant general manager) about him on the Lowdown this week. Lynn said a team (like Las Vegas) looking to add Reinhart might feel he could be their No. 5 defender for a decade, and provide a physical edge with reliable play.

It’s also possible the Edmonton Oilers feel Reinhart has a strong future with the organization. A left side of Oscar Klefbom, Darnell Nurse and Reinhart may be in place in the coming years, offering the club some size and rugged play on the port side. A big part of the story has to be written by Reinhart himself. That McLellan conversation must have been a difficult one and maybe he uses it as fuel to work his way back to the NHL.

We are a baker’s dozen through the Top 20, and the defense looks deep enough to consider a strength. Even better, more blue to come and that will add to the overall feeling that the cupboards are full. Still only one goaltender, and the wingers are going to be an empty room once Puljujarvi, Slepyshev and Caggiula graduate (Tyler Pitlick played his 50th game last evening, he has now graduated from the list). Reinhart does help in one important area: Pro defensive depth.