Connor McDavid hasn’t had a point in two games, the hockey Gods robbed him of a 5-on-3 and his competitive juices will be on high alert in the House of Eichel tonight. This could be fun! The December record is strong (2-0-1) in the early days, and the gales of November could not put out the playoff fire. It is beginning to look like the Edmonton Oilers will be in playoff contention through at least game 40. Music!

Edmonton was finding the range one year ago, winning 4-2 over the Buffalo Sabres. At 11-15-2, the Oilers were starting what I thought was their best run of the 2015-16 season. The Oilers are in a good place today, but as always, need to win some games. This week: Buffalo, Philadelphia, Minnesota, home to the Jets. What is reasonable? I will say 2-2-0.

On another note, I suggested 14 points in 14 December games as the reasonable line in the sand at the beginning of the month. This means the Oilers need to hit 40 points by New Years in order to reach a reasonable goal. So far in December, the club has five points in three games, but this road trip—and the busy schedule—could have an impact.

The individual scoring chances/60 points out just how much McDavid is driving his line. If you check out Leon, Lucic, Puljujarvi, you see they are not close to being near the top of the list. Now, McDavid is doing so much in terms of creating that all these men have to do is cash, but I feel we are still waiting for 97’s long-term linemates to emerge. Wayne Gretzky had been an Oiler for two full seasons before Jari Kurri came over from Helsinki.

I get a lot of emails and dms, many of the things I write about here come from you. I received a fabulous email yesterday and wanted to share it with you. I have edited the original email, the subject matter being JP and his possible involvement at the World Juniors:

This struck me as very interesting for all kinds of reasons. JP is not playing enough in the NHL, while also being on the NHL roster, and that is bad. He could be playing in Bakersfield, but the organization seems hesitant to send him down, I assume thinking he is making progress between games. At some point the WJs decision will be made (for all we know the club has decided to keep him) but a trip to Bakersfield for five games seems a good idea. I especially like the point about not being able to option in his second season. Thoughts? 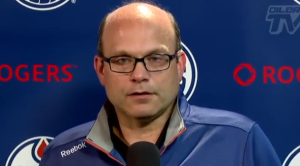 We have heard chatter about Matt Hendricks and Benoit Pouliot in recent days, interesting that two LWs seem to be in play. Nothing new to report, but I did want to remind you that the Oilers (traditionally) offload players while on road trips. I am sure there are reasons for it, we will see what this day brings.

With the Top 20 rankings occupying a lot of my time, I haven’t had a chance to look at the 2017 entry draft. Come January, that will change and we will discuss names like Tippett and Yamamoto. One thing I can pass along, and it does relate to this year’s Top 20, are the current NHLE’s for Edmonton’s prospects. There are some solid numbers, and some of those from unheralded sources.

Two college men finally getting ice time are showing well, although Aidan Muir’s season has been sidetracked by injury. I imagine Jujhar Khaira’s next recall is going to stick and don’t count out Tyler Benson for an extended look fall 2017. If Bogdan Yakimov returns to North America, where will he reside? California or Alberta? Some disappointing totals for the AHL kids, we will spend more time on that in the coming days.

I included Benning just for fun, he played only two games before being called to the NHL. Jones and Bear look promising in their final WHL seasons and there is a David Musil sighting on the scoring charts.

Lots to talk about this morning, beginning at 10, TSN1260. Scheduled to appear: