You will be forgiven if the name William Lagesson slipped your mind since the 2014 draft. That entire draft (Leon Draisaitl aside) looked off from the moment the NHL closed the books on it. Edmonton traded out of the second and third rounds, while also picking two goalies despite having only six picks! Oh, and one more thing: Only Leon was playing in the CHL, all of the other picks were either college men or about to be college men (and Keven Bouchard). This set up the 2016 summer of nothing, saved by free-agent collegians. The decisions made at the 2014 draft table (after Leon) are inexplicable. Lagesson? He has a chance.

This is a reasonable list for No. 16 on the top 20—we have a couple of second-round defensemen who posted more than 100 games, and some cups of coffee. Brossoit and Lagesson are probably the most promising names since Chorney. Rajala had some real talent, I believe, as did Teemu Harikainen—still don’t know what happened there. We don’t talk about him anymore, but there was a time when Theo Peckham looked like he had a real chance to make it. Edmonton’s kids sure fractured a lot on the way to NHL careers back a decade ago. No farm team? 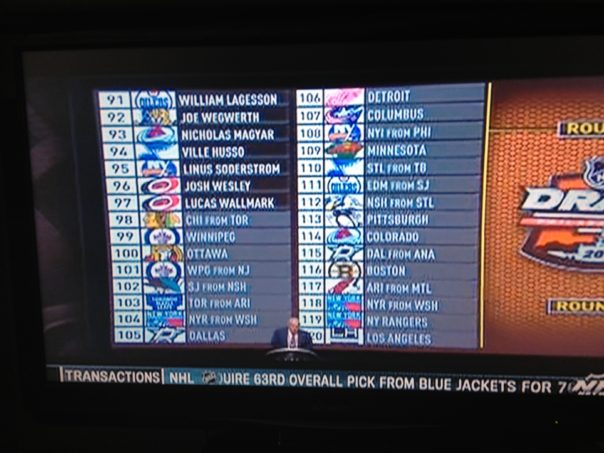 Lagesson is the kind of player my list probably underrates. He doesn’t get a lot of points, and despite being mobile and a good defender, awarding points for that kind of thing usually comes from viewings. We don’t see Lagesson much—as was the case with Jeff Petry during his college career—so these rankings may be shy compared to his actual value.

William Lagesson is playing 16:26 a night against top comp. Good spot for the freshman. (Also gets top teammates) pic.twitter.com/8vZUYrPrRf

Lagesson is a solid NHL prospect, but has some things going against him. As an Oilers prospect, his skills are duplicated (LH shutdown D with an edge) from Darnell Nurse to Griffin Reinhart and on down the line. I like his future, but he will need a little help to make it with the Oilers.

It also seems the number of jobs available to shutdown types is reduced each season. That is a big deal, because there could be fewer than 30 of these jobs available to Lagesson when he is NHL ready. A player like Dylan McIlrath, who would occupy basically the same roster spot, has been moved once already. Lagesson may have hidden offensive skills, the Swedish assist police have fooled us before, but the big part of his value appears to be defensive.

WASTE NOT, WANT NOT

EVERY GENERATION THROWS A HERO UP THE POP CHARTS