I always pick favorites, and that is the truth. When the late 1960s Leafs started bringing in young defensemen by the dozen, I chose Jim Dorey as my favorite. Habs? Serge Savard, and Larry Robinson too (even though I hated the Habs, and liked Guy Lapointe quite a bit too. It was a confusing time). My favorite young blue for the Oilers is Oscar the Dreamy, with his complete skill set and his skating ability. Man, this guy could be very good. Pull up a chair, we are just getting started.

The key item to look at is January—it is beginning to look like November, and that is February’s job. Edmonton badly needs to post a strong January, or the rope is snapped and we are looking at a seller in our town one more time. Oilers played well in the second half of the game, but needed a couple of extra stops to have a chance. If this is a trend—slow starts and a couple of wobble goals is now two games old—this team is about to slide.

This is not good enough, ladies. Now, for the good news. In the next several days, Edmonton faces five teams and the club needs eight points. That is four wins, or three wins and two Bettman points, something. Last night was an unsuccessful sortie, but the really important work is straight ahead. Edmonton needs five more wins this month. Giddyup.

JESSE ON THE ROAD

Jesse Puljujarvi picked up an assist in his first AHL game, we have a line in the sand of 1/1 AHLGP-Points and so we are on track. He played with Jujhar Khaira and Joey Laleggia on what looks like a 2line but I cannot be sure. One thing I wanted to remind you of: JP had some good things going in the NHL this season, age 18.

If JP had a normal (10 percent) shooting percentage, his boxcars would read 4-7-11 and we might be singing a different tune. I think his shot is good enough to score in the NHL, we should look for a strong 20-game run in the AHL, and then a return to the regular NHL lineup. This is what I would do.

I have to tell you this is shaping up to be a strange draft in terms of consensus. I pay attention to all kinds of lists—not as a guide, but as a curio—and it is rare to reach January and have this range even inside a top 10.

I have a great deal of respect for Craig Button, always pay close attention to his new lists. Red Line for me is the industry standard. As I mentioned, my list is mostly math so doesn’t really associate in terms of compilation with these two scouting lists. That said, RLR and Button don’t agree on six of the top 10, and the lists part after No. 1 overall. Hold on, this might be one of those drafts where really good prospects fall to No. 20 or later. 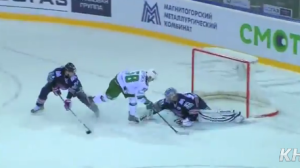 Once again, sincere thanks to Wood Guy and G Money for access to this, I am sure it drives them nuts to see me plod along in the slow adult learner lane. But, this is how I learn, and I am thrilled to bring you the information in my 1960s style. 🙂

Slepyshev is building a decent resume here, and since he has size (6.02, 187) and speed, this is a player who has a chance to hang around for some time. We shouldn’t project too much, even a Marc Habscheid (345 NHL games) is a distant bell, but this is a recall the young man did not receive in January one year ago. At the trade deadline, at least one winger could be gone. There is an opportunity here. I am cheering for him.

It is a cold Wednesday but better weather is on the way (actually here, just taking time to warm up). At 10 this morning, we hit the air on TSN1260. Scheduled to appear:

So long and thanks for all the fish

143 Responses to "ONE MORE MOUNTAIN TO CLIMB"