The Edmonton Oilers stole a point last night, and stole two points in a game on Wednesday. Craig MacTavish used to say that a team sometimes wins games they should lose at the beginning of a slump, and loses games they should win when coming out of one. Let’s hope this isn’t one of those times.

We had some fun yesterday discussing the Oilers over time, and changes in the weather that defined decades. There were some great posts offering insight, and I have changed the ebbs and flows from yesterday:

My thanks to all who contributed to the clarity, and to Stephen Sheps for some cool wording (used above). Scott Reynolds mentioned the Gretzky trade, and I included it, but maybe it needs a stanza all its own? Anyway, have a look, I like this little exercise, maybe we will do something with it in summer.

TIES THAT BIND, YEAR OVER YEAR

My reasonable line in the sand for January (17 points in 14 games) is on track (13 points in 10 games) but the Oilers now need to win two of the last four games this month in order to reach the goal. Plenty of good hockey this month, but there are some things that rightly cause furrowed brow this morning.

TAKEAWAYS FROM THE GAME 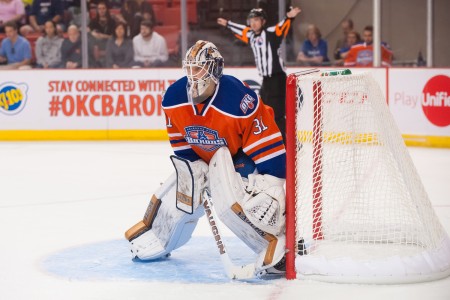 If the Oilers are going to give him a start before the All-Star break, tonight makes the most sense. The Flames, while remaining a strong club, and less formidable than Nashville and the two California teams coming up next week. Brossoit has earned his opportunity with several solid years in a row in the AHL. Here is his career in boxcars through November 30, 2016:

He got cranked in three straight games over Christmas, and his SP took a deep dive (now .908). Combine that with last year’s audition (.873 in five games with the Oilers) and the next NHL audition for LB is going to be important. My own feeling is that if an employee spends four years auditioning for a job and performing to your satisfaction, probably a good idea to give that employee an opportunity. The Oilers (at some level) are very high on Brossoit, the last time I recall management (pre-Chiarelli) as strong on a prospect on the farm was Steve Passmore. I hope he gets his shot, he has earned the opportunity. If he can deliver in the backup role, he will have solved a significant problem for this organization.

The Oilers slightly under-performed the opening road trip, but had a strong home stand and are now set up for the second roadie. There are four games left in the January schedule, if Edmonton can average a point a game this month should be considered a success. Beating Calgary tonight would mean a 4-0-0 run (Flames have one point) and a massive turnaround over previous seasons.

Well, fair warning, if you decide on a tattoo it’s highly unlikely you will get just one. My only caveat, find a good shop, which is defined by the vibe. Simply put, the artists willingness to listen to you but also put their own creativity into the piece. Also a good shop will not perform any of these on a first timer – nothing on your hands, above the collarbone, misspelling (yes people ask for No Regerts), girlfriend/boyfriend names on the really young (teenager). Unfortunately, most good shops have a long waiting period, I would not consider too many appointments that are booked immediately for within a day or 2 (unless you get dumb lucky from a cancel). expect to wait 1-3 mos for a really good artist, for the elite people…..sometimes up to a year.

Swinging back to SNL performances I’ve always thought they should let some bands play a 3rd song, even if just ad-hoc acoustic or go the extra few minutes. I think the most memorable SNL music performance (Sturgill is now in my top 3) was when U2 ended the show with I Will Follow. I’ll never forget the Edge closing the show with that great opening riff, even the cast was going crazy.

If SNL was my show, it would be just rock/punk, Sturgill and Chris Stapleton and the occasional old school hip-hop act.

No question, my first guest would be The Menzingers.

That was a fun/awesome game to watch! I can’t remember the last time I heard a “Let’s Go Oilers!” Chant in the enemies barn… Good on them for sweeping the fLames this year! 8 points in the bank that used to go the other way! But no more!! The Oilers have arrived!!!

I liked the show as well, great premise. I think the lack of a protagonist made it hard for most to really get into it.

If you enjoy Sturgill, I’d highly recommend both of his chats on the Joe Rogan Experience.

That’s amazing! Maybe one day I’ll finally cave and get the ink I’ve always wanted. But for now I remain tattoo free…

No not that far from shame.

Should have played Sugar Daddy. After watching Vinyl, i fucking love that track. It’s off the charts. When the guitar kicks in with the riff it blows me away. What a great intro to the show. Too bad it’s cancelled.

late to the show, but well played.

JDï™:
They really play ‘The Heat Is On’ after every goal?

Burst out laughing when that started playing. Good times.

2. Would you rather: Dougie Hamilton or Larsson?

3. Is Michael Ferland not our Tyler Pitlick? So hard not to root for this guy.

4. Notice how no pucks were bouncing on the Oil in the third tonight? Maybe I’m not reading the right blogs, but it seems to this viewer that the ice at Rogers hasn’t been the best, especially in the 3rd.

5. I wonder if it wouldn’t be helpful for Lucic to get a bigger stick. Especially after watching Jagr this week, it makes me think this might be a helpful offseason change for him.. He’s a quarter second slow to so many pucks. He looks to me to have the same size stick as Caggulia.

Must have been a flyer!

Well not to be a dink, but Yakupov – 1st overall NHL pick.

striatic:
The Oilers need to figure out a way to beat the Sharks. That’s the next major hurdle to overcome. Sweeping the Flames is great but getting swept by the Sharks would be embarrassing. How about sweeping the remaining games versus the Sharks instead? Why not?

Beyond mountains are mountains…

Thought we played them better the second game, but still nowhere near good enough.

McDavid played a chord and it pleased the lord…. again

Can we replace Weirs Beard with Cohen’s Cajones?

Decided on the Eberle jersey tonight. Wore it with pride!

Offside:
As an Oilers fan, it’s safe to say that I’ve now gone from feeling shame to, wait – what’s the opposite of shame?

As an Oilers fan, it’s safe to say that I’ve now gone from feeling shame to, wait – what’s the opposite of shame?

The Oilers need to figure out a way to beat the Sharks. That’s the next major hurdle to overcome. Sweeping the Flames is great but getting swept by the Sharks would be embarrassing. How about sweeping the remaining games versus the Sharks instead? Why not?

Must have been a flyer!

Is it safe to say the
Oil have turned North.

What’s that sound I hear coming from the Red Mile…?

Good chance we play them in the playoffs, so would be nice to find a way to win.

Hockey night in Canada Saturday night kick the Flames ass can’t get much better than that. I don’t know about you LT but starting to look like balance to me. They really have gelled as a group you know that chemistry thing. I don’t want to get to far ahead of myself but if/when the Oilers get in the playoffs watch out I think the fire has finally started I kind of feel sad that Taylor is not going to be there to enjoy it. Look out because here we come.

The ‘Let’s go Oilers’ chant inside the Dome after the game was loud and incredibly satisfying.

Great game to watch. Looks like Brossoit had a 927 save percentage, will be money if this guy keeps progressing.

Schlemko takes it for the Sharks in OT. damn.

Who says he can’t pass a puck?

spoiler:
Avs are now tied, but not much time left.

Sharks will pick up at least one point. Should be an interesting OT.

Not perfect, but solid when counted on and he got a lot of scoring support. There was a missed shot by Johnny Cocky early on that he seemed to give up a lot of net on, but…

Avs are now tied, but not much time left.

I only watched the opening skit, and the music segments. Fuck did he kill it.

JDï™: Being from the west coast, he’s a very shell fish player.

Definitely from the West Coast… I think I see weed on his upper lip.

Asiz should be really good, thought the Star Wars girl was pretty stiff. The writing was poor as well.

Should have saved Simpson for the musical guest tonight. Stoopid Lorne Michaels.

9 up on the Phleghms, LB played OK, deflections and foot off the gas opportunities, give him another start see if he can back it up

That’s good for the soul.

Thanks, Flames!
(for LB and taking Versteeg – he’s accursed)