The glory Islanders were one of the best teams I have ever seen. The goalies were a HHOFer and a guy you could build a marginal case for, the defense was led by the tough and frightening Denis Potvin, and the forwards boasted a perfect center in Bryan Trottier and possibly the greatest sniper in history of the game (Mike Bossy). Yeah.

The 1983 SCF was actually closer than you might think for a four-game sweep. Edmonton beat Calgary in the Smythe Division Final (in five games) by outscoring the Flames 35-13, that was domination. Oilers swept the Chicago Blackhawks in the Campbell Conference Final, outscoring them 25-11 in four games. In the four games of the final in 1983, the Oilers were in games 1, 3 and 4 into the third period. Source

The moment I devoted my Oilers fandom to beating the Islanders came after the 1983 Stanley Cup Finals. In an article called ‘On the Contrary’ Stan Fischler compared the Islanders victory over Edmonton in 1983 to the Battle of Britain and the Battle of Midway, with the Islanders representing Churchill and America, respectively.

I had just witnessed the Oilers rip through their part of the NHL, and show pretty well against a superior team (the Islanders won 19 straight rounds from 1980 to 1984). If you had seen the series in real time, the storyline would have been great team wins their fourth in a row and team on the rise learned a lot in losing. I still have that copy of The Hockey News these years later. Fischler’s words were piercing and memorable, if incorrect. The following season, Wayne Gretzky and the Oilers would win the first Stanley Cup in franchise history. I had a drink to salute Mr. Fischler, and then I had another one.

The Islanders were awful in Calgary on Sunday, suspect we will see a far better effort tonight at Rogers Place. The Oilers should be able to grab another win from this week, and if they grab victory tonight, perhaps we will see an even stronger beginning to the month. 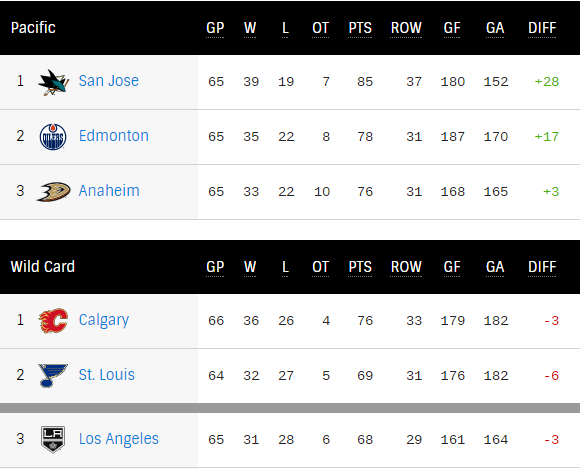 Edmonton has their fate in their own hands, and can help the cause with a win tonight. Calgary looks really good currently, but are unlikely to win 16 in a row to end the season. If the Oilers win tonight, they will be four up on the Flames with 16 to play. It is going to be fun to see this race over the next 30 days.

If we can agree that McDavid is the best 1C bet in the land moving forward, and that Letestu should return for 4C, then it comes down to Nuge at 2C and Desharnais at 3C, or vice versa. Could Edmonton sign DD for under $3 million? Would that be a good investment? Would you rather a RHC? Maybe Caggiula will be more capable of winning that job in the fall? I will vote McDavid-Nuge-Desharnais-Letestu unless they can get a righty like Derek Ryan who they think can score 15 goals in the 3C slot. McDavid is getting famous. A brilliant SI article is here.

One area of overlap I see is PP centers. McDavid is going to be 1PP forever, Nuge belongs on a 1PP but there is no room at the Inn. Desharnais duplicates those skills, and if he was a righty it would fit the 5×4 better. Something to consider.

Milan Lucic and Patrick Maroon have been among the top 9Fs all season, but Benoit Pouliot has been outside the top three lines, and injured to boot. I am wondering if we see him soon, and also wonder if they might be holding him back to make sure he is in peak form. A healthy and effective BP would be a Godsend. Laugh if you wish, this guy was a good hockey player until injury about one year ago. Slepyshev, Khaira and Caggiula are fighting for something, and Caggiula is winning, for now. Pouliot can put this to rest if he returns playing his usual game.

Anton Slepyshev may be a player. It will be difficult for him to push through the competition (Pouliot, Caggiula) but the job is there and his offense this year (over 82gp it would work out to 7-13-20) is encouraging for a rookie on support lines. Khaira seems set to take over 4L duties in the fall.

A depth chart next fall of Draisaitl-Eberle-Puljujarvi-Kassian is probably dreaming, and Pitlick may get signed and push his way into the conversation. My preference would be Puljujarvi-Eberle-Pitlick-Kassian but that might be asking too much of JP. I want to mention Slepyshev here too, his name may emerge at this position. Pretty sure the first-round pick will be a winger, but doubt he will be pushing for a job this fall.

I am really liking the WM numbers for what they bring, and that is a lot. For me, the minutes/game against elites is a tell. There are five men playing five or more minutes a night against elites, and one of them is a rookie. That is a major deal. The only man who faces elite competition more than six minutes a night is Kris Russell. I think Todd McLellan likes Russell on the ice to defend against top opponents, falling back into the age old idea that defending is the most important thing.

It’s how much you have the puck. Edmonton has been sliding a little in possession over recent weeks, because they are getting away from that one true thing: It’s how much you have the puck. Many folks think Todd McLellan is a poor coach, I don’t agree. I do think we all have biases, and Mr. McLellan likes defensemen who can defend well and has trusted Kris Russell a lot this season. Russell’s numbers (based on WM) aren’t horrible, and I can see a scenario where Edmonton signs the veteran. One thing that may keep the Oilers from a long-term deal with Russell? The McDavid deal. Matt Benning is walking on sunshine, Darnell Nurse doing well on the third pairing. Oilers have 30 goals from the defense, had 24 all last season. Can Oscar finish with 15? 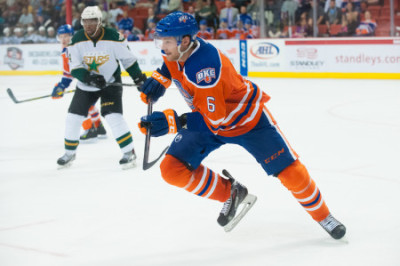 David Musil came to the Edmonton Oilers in an era of fog an confusion. On the day he was drafted, Musil (and Oscar Klefbom) were looking up at names like Ryan Whitney, Ladislav Smid, Theo Peckham,, Taylor Chorney and then after free agency Andy Sutton and Cam Barker among LHD. Musil didn’t pass any of them.

Musil was an excellent defensive player in junior, his intelligence obvious on every sortie defended. Over his time in the AHL, he once again did the mental math in order to become an effective defender despite having average wheels. I think he has earned a chance with another team, and that is what we are seeing. Hat tip to Peter Chiarelli and the Oilers, this was the right thing to do. Sail on, David Musil, I hope you find your place in the sun.

A month ago I wrote about some possible free-agent signings from CHL and college teams. It is here and includes Ryan Mantha and a few other defensemen as options. I suspect the Oilers are close to their maximum on defense, although a RHD wouldn’t go amiss and Musil’s exit will make room for another blue. Here is a re-print of my list of college and CHL players who might be interest from my January look.