The Edmonton Oilers lost at home last night, a 4-1 final that featured the hockey players in Edmonton being at least as frustrated as the fans watching. That is progress! I think Edmonton probably deserved a point last night, there were some brilliant chances. Connor McDavid might have been justified in clubbing at least one of his wingers into a fine white powder, but the interview after the second seemed to indicate he was laying responsibility at the feet of the captain. He is 20, you say? Huh. Must be a different kind of 20.

THE NO NO SONG, YEAR OVER YEAR

A disappointing result, but the chances favored (in my opinion) the home team. Islanders worked hard and earned the win, and I don’t think worldwide panic is an appropriate response at this time. Glad to see the comments section didn’t erupt into The Towering Inferno. The schedule for the rest of this week is tough, so we might have a little discomfort by Sunday night.

Edmonton hasn’t posted a truly disappointing month since November, and I doubt they will this time around. Winning one of the next two games is suddenly more important than it was, though. Important to have 5 wins by the end of the Los Angeles home game next week. 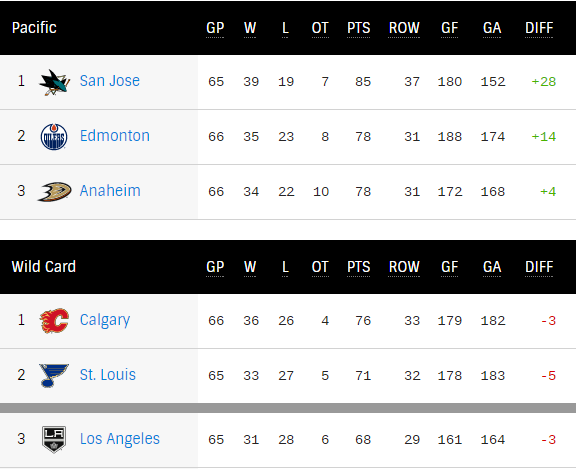 Opportunity missed, but still no danger here as long as the points come along at a reasonable pace. My expectation of the month is a little more than a point per game, but even 13 points in 13 games allows the Oilers to finish the month with 89 points on the season (after 77 games). Not perfect, but the Kings would need 21 points in their next 12 games to get to even. Such a tough thing, making up 10 points in the NHL.

Last spring and summer, Peter Chiarelli took action in the amateur procurement department. Leon Draisaitl had been long signed, but the rest of the draft crop (William Lagesson, Zach Nagelvoort, Liam Coughlin, Tyler Vesel, Keven Bouchard) were either years away from signing, would never be signed, or had been traded.

So, he cast about looking for college and CHL free agents, finally bringing in Matt Benning, Drake Caggiula and Nick Ellis (among others). That is a pretty impressive haul, and put the 2014 draft signing season in a new light. Leon is a fine first-round selection, and Benning in the second round would have been an extreme bargain.

Fast forward to this spring and summer, and the 2015 draft. Connor McDavid has already ascended to elite impact status in the NHL, and two defensemen (Caleb Jones and Ethan Bear) have been signed from that draft. At some point, we should see John Marino, Ziyat Paigin and Miroslav Svoboda signed, some of them this spring.

That said, and this should be a flood this spring and summer, Chiarelli needs forwards for the giant procurement beast. The team has signed RHD Ryan Mantha as a graduating CHL free agent, so defenders are unlikely to be a target now. Forwards? Oh my. Here are the AHL-level forwards with contracts for next season:

No doubt PC will sign several RFA forwards (eligibles include Joey Laleggia, Bogdan Yakimov, Jere Sallinen, Henrik Samuelsson, Anton Lander, Jujhar Khaira), but a guy like Khaira will have to clear waivers and most of the rest are less than 50 percent based on performance. I will guess Laleggia, Khaira and Lander return.

At this point, I think we are looking at a real problem. Anton Lander, he of the impact scoring in the AHL, cannot get a regular job in Edmonton to save his soul. Right now, on the current roster, Lander could help on the PK and possibly 3L, if given a chance.

As is the case with Mark Fayne, I believe we are dealing with actual NHL players whose foot speed (or lack of) is enough of an issue for Edmonton to consider them fringe NHLers (or worse). At some point, both men will be cast out of the organization and move on. Fayne is of an age where one assumes a full reboot and recovery is a distant bell.

Lander? Well, he may catch on somewhere, due to his unique set of skills. An NHL team looking for an inexpensive utility forward might find him to be a Swiss Army knife. They may also unlock his offense in the higher league. I have been using all 10 of my brain cells to find a comparable, and have none. How many players in AHL history have his skill set and cannot find regular work? Not many, I believe. Speed is becoming more important by the hour.