A giant walks among us, and last night Connor McDavid shone like a diamond on a giant stage. It was a beautiful game, one I will remember for a long time. Edmonton lost in the shootout, but won a lot of respect from me in regulation. In a stunning evening for entertainment, the Oilers supplied enough excitement for one hundred heart attacks before they tied the game.  The lesson from last night? When involved in an old fashioned western shootout, bring Connor McDavid and Cam Talbot. Then again, that has been the formula all year.

We are witnessing greatness in the person of Connor McDavid. Nine shots. NINE! Need a goal? Got it! There are times in the world of sports when single performers, touched by God, can reach out and change the current, impact real time. Connor McDavid is such a player. We saw it, last night.

Looking good, last night was the tough game this week and the club grabbed a point. Sunday 5pm games are not exactly the wheelhouse for this young Oilers team, but early to bed and let’s get these two points and put the also-rans on the run out of town riding donkeys. 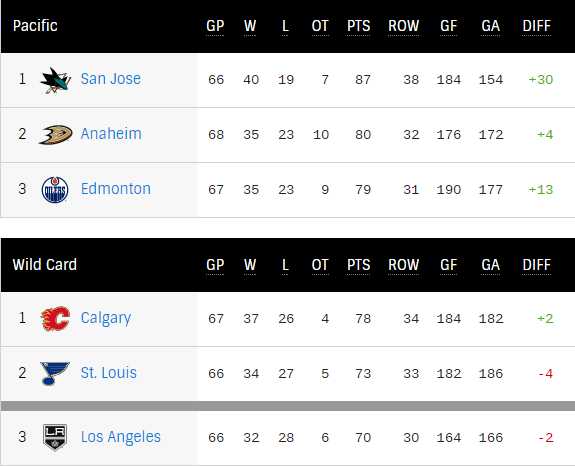 A big point last night, Edmonton stays ahead of Calgary while also putting pressure on the Anaheim Ducks. St. Louis with a big win makes life more difficult for the Los Angeles Kings and of course a bunch of games impact the race today. This is fun! Flames play  the Jets tonight, betting against Calgary lately is a bad idea, Capitals play the Kings in the late game and if LAK lose, the club would be nine points down with 15 to play.

@Condors @CondorsHolty @Lowetide Back and forth, 1-1 going to the 3rd period… pic.twitter.com/Nhz50Kw28x

Joey Laleggia scored in overtime for the win, and the Condors have a real chance at making the postseason now. Still a few weeks to go but the club has been winning consistently and the PK is the best in the division. If they can get the power play untracked, they might be able to make some noise in the postseason.

zach aston-reese is the only hobey candidate worth voting for https://t.co/4VAzHg3PpV

Ryan Kennedy of The Hockey News is reporting that as many as 15 teams are after Aston-Reese, who appears to be a substantial NHL prospect.

BLUE ON BLUE, HEARTACHE ON HEARTACHE

A MUST TO AVOID