Are we having fun yet? The Montreal Canadiens of my youth were probably the most famous athletes in Canada at the time. The 1970-71 team featured an iconic old guard , led by Jean Beliveau, Henri Richard, newly acquired Frank Mahovlich and John Ferguson; a stunning prime group that included Yvan Cournoyer, Jacques Lemaire, Jacques Laperriere, Serge Savard and Rogie Vachon; and an emerging group that included Peter Mahovlich, Guy Lapointe, Marc Tardif and Rejean Houle. Oh, and they called up Ken Dryden with six games to go in the regular season.

I can still see them in my mind’s eye, as they were in that season, youth designed to replace age in perfect time, and the roster quality so tight no one player was forced to take on more than he could handle. One of the key items for Montreal that season was Houle, a young two-way player of outstanding quality. John Ferguson, a warrior similar to Milan Lucic, was no longer able to handle the checking role that was entrusted to him. The young rookie, in his first playoff, was the reliable man on the line, and the club won Stanley. As painful as it was to watch these Habs crush my Bruins and all who stood in their way, it was also impressive to see a team so well prepared.

Those Montreal Canadiens teams of my youth were towering rosters, made to win Stanley every spring. And you know what? They damned near did. I will admit there are times I think about digging up Sam Pollock so I can yell at him in person, but even I can admit he created a work art those long years ago.

WHAT THE HELL I GOT, YEAR OVER YEAR

G68 a year ago saw the Oilers win a tight one over the Winnipeg Jets, as Cam Talbot stopped 39 of 40 shots. Every Mother’s son will talk all day about the Oilers choking, but the truth is the Edmonton Oilers haven’t had a bad month since November, and even then it wasn’t a disaster. Sometimes you have to give the other man his due, and we are at that moment today.

Tonight is a tough game, but it will be followed by what should be an easier week for the Oilers. There are still some fans who are worrying about the playoffs, but for me this Edmonton team has shown a lot no matter the outcome. That Penguins game was a watershed moment for me. The Oilers are being challenged, do they have a response?

Elliotte Friedman reports the Oilers are one of the teams chasing another free player, and now that they have proven able to grab these really good college free agents, we best pay attention. NHLE is 82gp, 26-26-52 and I imagine he is NHL-ready or close.

This is 750 or more minutes, 5×5 points-per-60. I call this God’s flashlight because there is no way to hide. If you are a top 6F, and better than average, then you must be inside the Top 90 (or so) for the season. Some nice recovery for that 2line, but they waited so very late and are still well back. Jordan Eberle looks like he is the one second line player  who is going to recover his season. 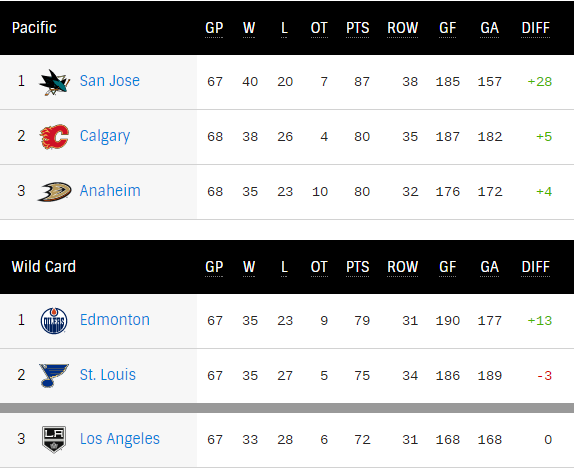 Based on dm’s and email verbal you have sent to me, the latest standings are not wildly popular in good old our town. What’s more, my efforts to calm the waters and suggest this is an excellent challenge for an emerging team seem to have enraged you. So, let’s stick with the facts and hopefully we can all find some peace in the valley.

Edmonton remains in a very good place, despite the historic run from Calgary and the performance spike by the Los Angeles Kings. Let’s run the records for the teams in question over the last 10 games:

There is exactly one surging team (CGY) and the rest are basically running a typical record for a Bettman-era NHL team. The Oilers had some tough road games during their last 10, and are about to head into the easier part of the March campaign. Miles to go, and I understand the difficulty in watching the Flames pass Edmonton. However, they are full value for their record, recovering beautifully from a terrible start. Calgary could win the division, and push deep into the playoffs. Their team is more mature and balanced, while Edmonton has a ways to go. This is going to be a terrific run to the end of the season, I can’t wait to see how this team responds.

Five forwards have been scoring at good to great levels over the last 10, with Patrick Maroon the only slumping member of the top 6F at this time. Oscar Klefbom, Mark Letestu and Zack Kassian have also scored well during this period, and David Desharnais has had early offensive success.

WHY AREN’T YOU IN FULL PANIC MODE, LT?

If you are enraged by the standings, upset at the recent performance of this Edmonton team, tweeting out verbal that suggests the current situation has long-term impact and meaning, I would like to suggest two things to you:

I have always felt the Oilers, as currently set, lacked enough balance to push through into the playoffs and a first-round win. I picked the club to finish with 84 points, for heaven sake that is not a ringing endorsement. Over the season, this Edmonton Oilers team has shown me a lot, and not just Connor McDavid and Cam Talbot.

Is it possible that you no longer believe in this team just as I start to believe they can push into the postseason, even with their flaws? At the very least, we should see how this thing plays out. I will tell you that, for me, this Oilers team has already shown a tremendous amount over 2016-17. I believe in this Edmonton Oilers team, and even missing the playoffs won’t change that opinion.

So, I guess I owe you a debt of thanks. Your outrage at this team performing well in the face of an historic nine games by the Calgary Flames helped cement my view of this team as a contender.

I hope you can join me soon.

WHAT THE HELL IS GOING ON OUT HERE?