The Edmonton Oilers romped over the Dallas Stars 7-1 last night, most everyone chiming in on the scoreboard and posting a crooked number. The power play cashed, the penalty kill killed and the evens went bigly. At a time of year when the tension was perhaps running higher than it should be among the fans, last night surely let everyone find some release. It was a good night.

WALKING AFTER MIDNIGHT, YEAR OVER YEAR

The year over year gap is incredible, really a canyon now. It is not an historic gap, falling well short of the Snake River Canyon. That said, this is a good NHL team and we haven’t had one in our town in over a decade. After 69 games last year, Edmonton had 59 points, and this season the total is 81. A 22-point increase is massive, with the remaining question being how high can they fly?

We are now back in normal range, not quite halfway through the month. If Edmonton grabs two points tomorrow night, they will be right on track with expectations. Big games tomorrow and Saturday, and Monday looms large. 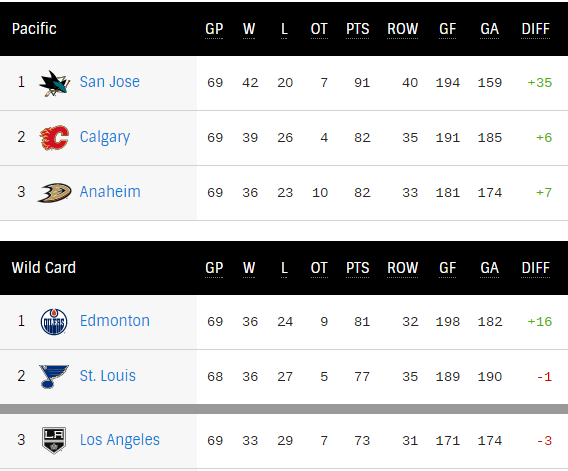 We have discussed the importance of this week and last night was a very good one for the Oilers. Winning allows the club to keep pace with the Calgary Flames and Anaheim Ducks, setting up a fantastic three-way race for two spots and a first-round playoff series that could be epic. I am writing this in the moments after the LAK lost in a shootout, and that feels like the kind of good fortune this franchise hasn’t been privy to for a very long time. Stay tuned, this crazy train has some more turns before we reach the end of the season.

At 5pm today, unless something breaks, I will publish Eric Rodgers’ estimated time on ice totals for Oilers prospects in the AHL. It is important work, and I thank Eric for doing it. What we are looking for is some sign of offensive spark from these young prospects. Jesse Puljujarvi (who picked up an assist last night) is now 26, 9-12-21 on the season and may see NHL action before the end of the year.

Another player we may want to watch? Jaedon Descheneau. He scored again last night, now 2-3-5 in his last five Condors games. We have discussed procurement for the fall, and Descheneau should be a candidate for an NHL contract. He isn’t scoring at the rate Josh Winquist did a year ago, but he is a name to add to the list. More at 5.  I wrote about college procurement and other ideas at ON this morning, that item is here.

At 10 this morning, TSN 1260. A fun show with interesting people! Scheduled to appear:

89 Responses to "THE CLEAR LIGHT OF DAY"