The 1971-72 Boston Bruins were probably my favorite, kind of a tight race between the 1970 Stanley team and the two that followed. The 1972 team also won Stanley, with all kinds of interesting stories (Ted Green missed the 1969-70 season so this was his first Stanley, Carol Vadnais came over from the Seals late in the season and I always liked him, Garnet Bailey was from just down the road so that was cool) past Bobby Orr, the Esposito line and the goalie tandem of Gerry Cheevers and Eddie Johnston. My recollection of the lines and pairings:

I  loved that team, and a big damned bunch of them jumped to the WHA that summer. Gerry Cheevers, Ted Green, Derek Sanderson and Johnny McKenzie all bolted to the new league and Milt Schmidt didn’t protect Daniel Bouchard in the expansion draft. Orr’s knees were a big worry fall 1972, but I knew they would be back for another Stanley. Four years later, Bobby Orr was in Chicago and his career was pretty much over. The Bruins did win Stanley though, in 2011, 39 years removed from 1972. The Stanley doesn’t come around often, and for Oilers fans of a certain vintage, the playoffs would be a fairly new experience. I can’t wait! Let’s not get ahead of ourselves, still work to do.

G70 last season was a 2-1 win over the Minnesota Wild, winning goal Connor McDavid. Including tonight, the Oilers would go 5-7-1 to finish 31-43-8. If the Oilers finished the same way, their final record would be 41-31-10, 92 points. The expectation would be a stronger run, that’s why they play the games.

The week of BIG continues with the Bruins in town to play Edmonton. Should the Oilers win tonight, the expectation for the month overall clicks back into place like the Lego of our youth.

The two things I want to know about forwards: 5×5/60 scoring and quality of competition. Woodmoney is giving us a really good look at qual comp, for this season the Nuge line and McDavid line are playing the toughs.

McDavid ranks No. 8 among forwards and Zack Kassian is enjoying a helluva run now. Maroon and Draisaitl have faded a little but will finish with handsome boxcars courtesy help from 97. Mark Letestu has had a good year and I have to give credit to Jordan Eberle for scrambling and then saving his year with hard work and natural skill. Nuge and Lucic are still peddling and will be needed in the coming games that may include the playoffs. Benoit Pouliot’s goal is hopefully a sign of things to come.

I think a reasonable plan of action would have been spending this season bringing along Jesse Puljujarvi and Leon Draisaitl on the skill lines this year, then (if necessary) trading one of RNH or Eberle in the summer to make the money work. One problem. Jesse Puljujarvi is not an established NHL player yet, so the Oilers would be vulnerable on RW moving forward. I think we might see the Oilers deal Nuge before Eberle, which wasn’t my feeling entering the season. Hopefully neither man has to go this summer.

The Woodmoney shows five men (Russell, Sekera, Larsson, Klefbom, Benning) are at similar levels in terms of qual comp, suggesting that Todd McLellan has two pairings he trusts about equally. I like using Corsi and Corsi Rel, and then factoring in the qual comp on those numbers. Today, I am going to  list those numbers and then another set.

Fascinating. This is 400+ minutes from the defensemen, Matt Benning is a fantastic rookie. Three of the regular top 4D are hovering around 50 percent, while Kris Russell is well behind. His Fenwick numbers (48.2, -3.9) are much better, and then there are the goals-against/60 numbers. Darnell Nurse has improved a lot from his rookie season, we will go in depth during the upcoming RE (still not sure of the music, please send in your choices).

What I believe is that the GA60 5×5 will regress if the Corsi possession number remains that low for Kris Russell. That said, if I am Kris Russell’s agent I am laminating this puppy for the negotiations to come. 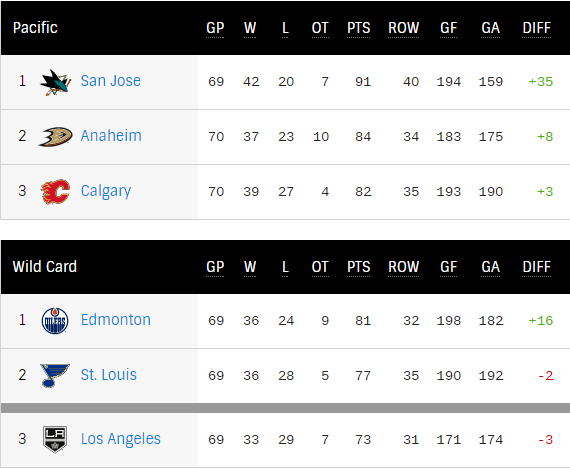 Good news so far this week but we have miles to go. If the Oilers win tonight, they will leapfrog the Calgary Flames. That could be short lived, because the Flames play Buffalo tomorrow night. The Sabres play the Kings tonight, so LAK could be within six points of the Oilers by the time we reach midnight. The Blues play San  Jose, so a STL loss combined with an Oilers win and LAK loss would mean EDM up by 10 points over Los Angeles and six points north of the Blues by this time tomorrow morning. It is a big night.

Plenty of free agents still to be signed this spring and summer, I will have Kirk Luedeke from Red Line Report on this morning to discuss names like Mike Vecchione, Neal Pionk, Mitch Hults and CJ Smith.

Jesse Puljujarvi at a ~ point/gm, 3 shots/gm pace in the AHL since being sent down. Similar to pace of David Pastrnak at the same age.

This is a helluva tweet, one worth remembering should it come to pass. I haven’t seen this mentioned anywhere, but if JP turns into anything close to Pastrnak as a scorer, Oilers fans should be over the moon.

At 10 this morning, we hit the grounding running, TSN1260. Scheduled to appear:

So long and thanks for all the fish

Can’t You Hear Me Knocking (on your door)

Tarkus: * – Mediocre for that lineup anyway. Still better than anything from the Coverdale/Hughes outfit, with the exception of Burn.

Pretty sure that predates Machine Head. You should ask your friend.

You’re absolutely right. I got it mixed up with Who Do We Think We Are.

I may be too late for this thread but concerning the music for this spring’s RE series…. i have been requesting The Band for the last several years so please go with your gut and stick with that. There are so many great songs and song titles of theirs and with the artists they played for

– Life is a Carnival (McDavid,)
– Up on cripple creek (Pitlick?)
– The weight (Talbot, carrying the goalering on his back)
– The night they drove ol dixie down (hendricks if he resigns lol)
– Helpless (Kris Russell)
– Who do you love?

Will repost in this morning’s new thread

Loving DD so far. Every time he passes to someone it seems to result in a nice look.

spoiler:
Needs to be a thing….

Yeti: Was that Gillen’s last album with the band? It’s been ages since I listened. From memory, I think the title track was great but some of the other material wasn’t quite up there with their more classic albums.

Gillan’s last album with that era of DP was Who Do We Think We Are, which came after Machine Head. It’s a mediocre* album, most notable for the single “Woman From Tokyo”.

About Fireball–humor wasn’t exactly a hallmark of Purple, but “Anyone’s Daughter” and “No One Came” are two of the wittiest songs the band ever recorded. The former is especially remarkable, a country-blues ditty that sounds nothing like anything else they did.

* – Mediocre for that lineup anyway. Still better than anything from the Coverdale/Hughes outfit, with the exception of Burn.

spoiler:
Needs to be a thing….

Pretty sure that predates Machine Head. You should ask your friend.

JDï™:
Wake up early to watch the highlights!

Thats a great site. My usual ritual for watching highlights involves strategically placing my hand over the TSN app and peeking through my fingers to hide the score.

Thank you citizen, for my quality of life has improved this morning.

Was that Gillen’s last album with the band? It’s been ages since I listened. From memory, I think the title track was great but some of the other material wasn’t quite up there with their more classic albums.

Wake up early to watch the highlights!

Needs to be a thing….

To everyone who called for Woodcroft’s resignation earlier this year, don’t look now but the Powerplay is ranked 4th in the league…you doubters know who you are….feel shame.

Nice to see Kassian getting a standing ovation from the bench (Led by Looch) upon exiting the box after his fight with Z.

David Backes: a longtime kicker of sand into the faces of many Oilers over the years, completely invisible in a game as physical as this one was.

Just getting caught up with the comments

-was the ice better tonight..?..the lack of comments would suggest it was better. I didn’t seem to notice it as much tonight

-Sleppy looked great, the Oilers brass had to have taken notice

I like to complain about McLellan but he put together a fantastic forward lineup and was rewarded handsomely for it. Really pleased. Love the speed of the team now with Kassian Pouliot Cagguila Slepyshev

Pouzar: I get that but there is nothing Pak does better than Slepy imo.

Our pk sucks without him!

Congrats to the Calgary Flames;

You are now Oilers official rival for today and the future

It’s going to be a great race to the finish line.

Ice Sage: for nostalgia buffs, both Hemsky and Hall

Now, Oilers fans can argue on Lowetide with the Hunter1909 Death March “who knows more” feature.

Adam Larsson now +18 on the season. I just love watching this guy play.
Talbot – played ok but seems to be wearing out. Self inflicted wound by Chia / TMac.
Did not see last the two defeats but the team looks better balanced with DD on third line and Letestu on the fourth.
Nurse looking better and better.

Nuge gets credit for 5th goal on PP (Caggs, Ebs)

And for nostalgia buffs, both Hemsky and Hall had some lovely goals tonight.

The Oilers may not be balanced but they’re teetering in a better direction.

The Canucks may have to start both goaltenders this weekend

Oilers back to a 97 point pace, with these current leaders until puck drop next game.

hunter1909: Players pick the amount of goals they think will win/lose the game. If they’re too dumb to write the name of either team they’re disqualified.
Game as of after 40:0060:00 OILERS 7 BOSTON 4

Ahead of the Flames! Hopefully for good.

Hope Bellesky is OK. That was horrible.

You don’t want to see that even to one of the hated Bruins.

Lowetide: Todd McLellan likes Pakarinen. A lot. That said, the Oilers wanted more finish around the net from him and they got it tonight.

Seemed like he liked Korpikoski last year, Chiarelli ended up buying him out. You think they qualify Pakarinen, or let him go UFA?

I just don’t see how any NHL player skates onto the ice without ear guards on their helmet.

JDï™:
As tough as it is to say this, hopefully he’s okay.

As tough as it is to say this, hopefully he’s okay.

I blame St. Patrick. And the leprechauns. And those dagblamed shamrocks.

It was icing Drew.

Oilers running the Hawks was a real treat, at the time.

Lowetide: Todd McLellan likes Pakarinen. A lot. That said, the Oilers wanted more finish around the net from him and they got it tonight.

I get that but there is nothing Pak does better than Slepy imo.

This is practice at this point. Important practice.

Avoid injuries, get some TOI for rooks

That’s a meh call… not a “good” call remenda…