There are a few things about this spring that are going to be different around here. Draft coverage is going to be sporadic and limited. Game day threads will increase by at least four, and we are going to have to discuss the possible summer transactions while other things are going on. So, even as the race for the Pacific Division crown is back on, we will spend a few minutes today looking ahead to summer.

The club is one point ahead of our projection, and it looks like November will be the only poor month of the season. Due to the whole world going crazy, the Oilers have a chance at finishing first in the Pacific Division, making this a bigger game. More in a minute.

There are a bunch of questions that are rolling around in my mind, a few you have passed along and several I have read about pertaining to the overall health and future of the team.

These are early days and this list is going to change, but everything on this list makes sense to me. A volume shooter for the 97 line, a veteran RHD to replace Russell (who I am guessing will receive substantial offers that leave EDM out in the cold), a backup and then push for forward prospects.

The other option is dealing Nuge for Justin Faulk or Travis Hamonic, and then signing a $4M checking center. That makes a lot of sense, too. It might become necessary depending on contracts for Leon and Kassian. 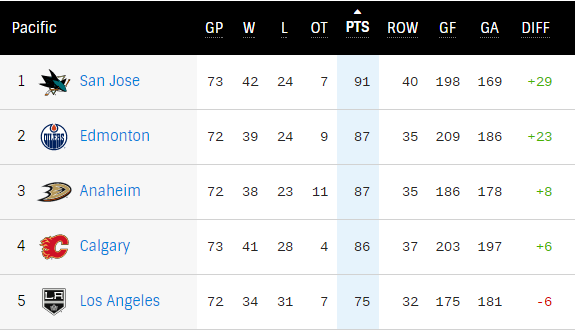 It’s a big old goofy world, folks. How on earth did we get here? Oilers win tonight and they are within two points of the Sharks! Connor McDavid, you are a shooting star.

A morning with shifting sands has me working on a few guests as we speak. My goal is to shoot out to Anaheim and then track to Toronto for some Jays talk. F1 and other subjects out in the ether, I can say we have Darcy McLeod at 10:20 to talk Oil and Steve Kournianos from The Draft Analyst at 11:25 to talk about college free agents and spiking draft eligibles. 10 this morning, TSN1260. 10-1260 text, @Lowetide twitter.