By playoff time in their second NHL season (spring 1981) the Oilers were ready to make some noise. The quick exit against Philadelphia forgotten, Edmonton faced the legendary Montreal Canadiens in Round One that year. No matter how you felt about the Habs of that era, they were an impressive crew. The legends came in waves, I remember Steve Shutt being especially strong in that series, but each line and pairing boasted a famous name. The upstart Oilers cared not one damn, and drove them off the road in three games, scoring 15 goals to Montreal’s six during the three-game series. Legendary Canadiens? Guy Lafleur, Steve Shutt, Guy Lapointe, Larry Robinson, Serge Savard, Rod Langway, Bob Gainey, Pierre Mondou, Rejean Houle, Pierre Larouche. Hell boys, that’s an All-Star team! Steamrolled.

The Oilers faced the NY Islanders in the second round, pushing the eventual Stanley Cup winners to six games. No other team would give New York as tough a time in 1981, and from that series forward the Oilers knew who they were chasing and the improvements required to conquer the Potvins.

G77 was a 6-3 win over the San Jose Sharks, Patrick Maroon with the winner as he showed early chem with Connor McDavid. Edmonton reached 30 wins and would win another before the end of the schedule. If the Oilers win tonight, we can talk about 100 points as a possibility. Incredible.

Final game of the month and full credit to this emerging team. The numbers are terrific, especially since leaving Montreal (7-1-0). I have to say, this has been a very impressive month. 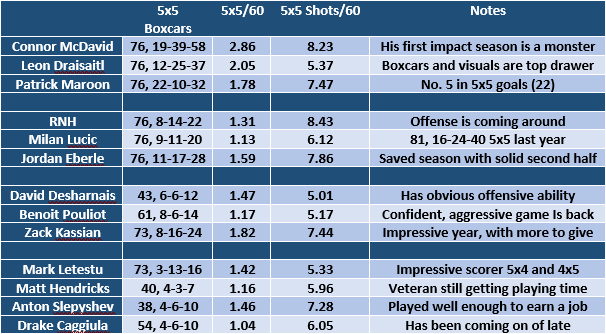 Very fair assessment by Sundstrom, who will join me on the Lowdown at 10:40 this morning for an entertaining and informative chat. SJS went to the SCF a year ago, and have crazy skill married to responsible players and a system that works for its employees. Tonight could be a playoff preview and the Sharks are finding their legs (I know, I know, but it’s approaching 8:30 and I don’t have tie to think of another line).

The Oilers trio of blue (Bear, Caleb Jones, Ryan Mantha) are all having varying degrees of success, I find myself hoping we see one or more in the AHL by year’s end. Bear had an impact offensive season and based on reports improved defensively as well. Suspect we will all project these kids to the NHL too soon, and am heartened by the fact the Oilers finally have enough depth to let these youngsters develop at their own pace. A reasonable guess on NHL debut ETA for any of these three is halfway through entry-level deal. If they make it before then, music!

Still no word on Vecchione either. Could be a package deal. https://t.co/Gzm4JwD90D

As we discussed yesterday, Peter Chiarelli has tons of room on the 50-man if he cuts deep this spring on the RFA’s and UFA’s. Based on what I have been reading, Foo is the more promising prospect, although seems Vecchione is the more famous:

A package deal might be a very good fit for an organization looking to populate the pro system with as many plug-and-play options as possible. Stay tuned!

A very busy morning, lots of terrific guests. 10 this morning, TSN 1260 and scheduled to appear: