The final standings are coming into view, and with that the playoff matchups, too. An educated guess today would have the Oilers facing San Jose (their next opponent) and the Flames going up against the Anaheim Ducks, but we might see a trick or two on the way home.

WITH MANY A WINDING ROAD, YEAR OVER YEAR

As impressed as we were with the Anaheim game, the Oilers had their share of problems last night in Los Angeles. Poor coverage, lack of support, an ability to sustain attacks on sorties. It’s tempting to chalk it up to looking past the Kings, but the truth is this Oilers team has had some possession issues and wobble problems throughout the piece. Work to do, miles to go.

WHAT TO EXPECT FROM APRIL

Things tend to sort themselves out and last night gives Edmonton some options in terms of deployment. They could still win the division, or finish in second and get home-ice advantage for their first series in a decade. They could also rest Cam Talbot and some of the position players who may be nursing various injuries and maladies. It should be an interesting week.

Jujhar Khaira has been sent to Bakersfield, probably a combination of conditioning stint and ringer for the playoff run. He played just three games in March, that’s not going to get it done and he’s entirely useful in Bakersfield. Using Eric Rodgers’ latest numbers, here’s Khaira’s AHL playing card:

The achilles for most of the young Condors forwards is going to be offense, but Khaira has improved year over year by the boxcars. Rodgers numbers from a year ago suggested 2.05/60, so he is running in place based on the estimates. Khaira’s AHL offense suggests we are looking at NHL Kyle Brodziak offensively, and he brings some other elements, too. Khaira hasn’t been the same since injury, but playing time in the AHL should get him productive again. Condors play tonight in Texas, big game.

I don’t think we’ll see Nurse-Benning tomorrow night and I really don’t like the idea of splitting up the current top pairings. What to do? Eric Gryba is 7D so he’s the only option, but I do wonder if the Oilers might call up Mark Fayne at some point. If this third pairing becomes a black hole, and we know young defensemen can go walkabout at times, Fayne is my option for the job. He’s a better player than Gryba. 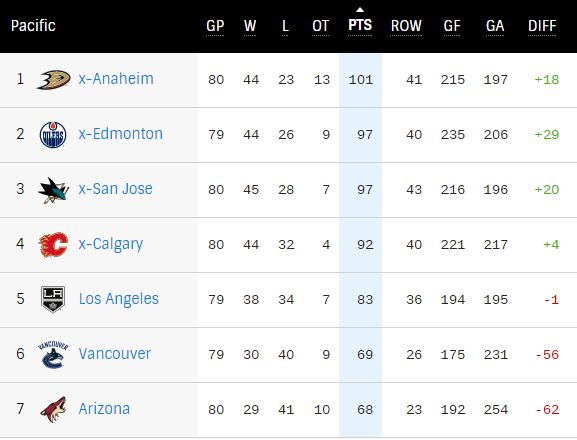 A lot happened last night, and it brought tremendous clarity to the table. The Flames are now playing for wild-card seeding, either No. 7 or No. 8 in the Western Conference. Edmonton’s game against San Jose tomorrow night is likely for second place, but if Anaheim stumbles against Chiago and the Oilers win out, they could take the division.

There is still a slight chance for Edmonton-Calgary in the first round, but the Oilers would need to win the Pacific to do it. 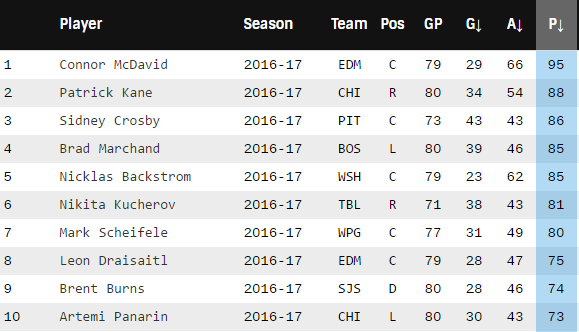 There was a time, not so very long ago, when the scoring race was a flat out tie. Just weeks later, Connor McDavid hit overdrive and we are here. I’m not going to say it’s over, Sidney Crosby is an impact player in every game he’s in and Patrick Kane is breathtaking when on a hot streak. That said, 97 leads by a touchdown as we head to work this morning.

Live from Northlands this morning, it’s a blast at the Ford World Men’s Curling Championships and it’s a pleasure to be there. At 10 this morning, scheduled to appear: