The Edmonton Oilers won their first Stanley in the spring of 1984, and it was good. By the fall, the team had some new names (Billy Carroll was claimed off waivers from NYI, Mike Krushelnyski came over for Kenny Linseman on the Boston-to-Edmonton pipeline, Larry Melnyk came the same way) and in late January Mark Napier came over from Minnesota. I loved all of these transactions, a guy like Napier was a bullet on skates and had an immediate impact. Krushelnyski was the biggest add, scoring 43 while also being very large for his time.

By 1985, I had so much confidence in the Edmonton Oilers that people around me became irritated enough to tell me to FOAD. Seriously. Looking back, it was pure asshattery but in my defense being a fan of the Oilers meant winning. The team scored over 400 goals, allowed less than 300 and Wayne Gretzky posted 47 points in 18 postseason games. The 1984-85 team was ridiculous, and oh by the way Esa Tikkanen arrived in time to play three playoff games. Lordy.

NAMES ON THE STANLEY

G81 one year ago saw Edmonton win 6-2 over Vancouver Canucks, Hall and McDavid both going 1-2-3 on the night. Edmonton can pass 100 points tonight, the first time since 1987. Points are awarded more easily now, but it’s still a terrific accomplishment.

WHAT TO EXPECT FROM APRIL

We’ve been chasing reasonable all season long, and this team has hit every mark but one. Consistency, like clarity, is enormous upon arrival, but 15 minutes after it enters the room we forget about it while also assuming it will be with us until end of days. Do not take this team for granted!

Since 2010-11, there have been over 6,000 man seasons in the NHL. Only four men (Evgeni Malkin, Patrick Kane, Daniel Sedin, Sidney Crosby) have scored 100 or more points in a season. I’ve seen all kinds of mentions of McDavid’s scoring total against the backdrop of Wayne Gretzky’s historic totals, but I think that’s comparing apples and oranges. If Connor McDavid gets three points this weekend, he will join an extremely elite group of men who have hit the century mark in the modern era. This is big, people. Don’t let anyone tell you different.

Talbot’s 41 wins are an outstanding total (this is not a great team) and his save percentage numbers are in or near the top 10 among regulars (35 or more games). Edmonton will need to add a capable backup (probably Laurent Brossoit) into the rotation a year from now, but Talbot posted a tremendous year when Edmonton needed him. 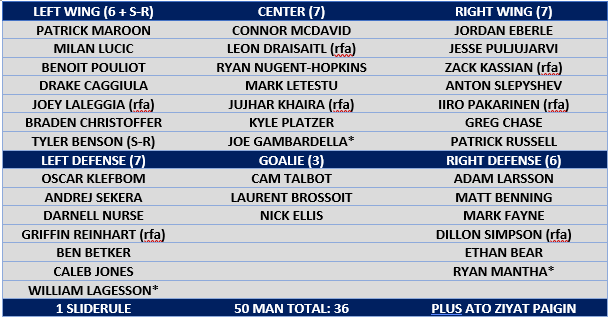