Rise and shine, Edmonton. A new generation of heroes have arrived to bring us great joy. We don’t know the year, the hour or the day, but this team, the McDavid Oilers, are bound for glory. Are you ready? 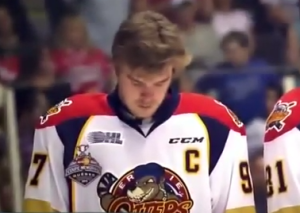 For me, hockey postseason is a lot about memories, going back to my youth. Playoffs were with my Dad. He was a working man (six days a week when I was a kid, he finally stopped working at 75, passed at 80) so time was dear. Cribbage and playoff hockey brought us together. I can’t put into words how much I miss him. By the time the Oilers won their first Stanley, my Dad was 72, and I was down the road finding my own way. Today, with so many great games to come, I am thinking of my Dad and the love of hockey he passed along to me. He loved the headman pass, he hated the Habs but never said a bad word about Beliveau, and big Frank Mahovlich would have been welcome in our house any time. Miss you, Dad. Now. Let’s rock and roll.

YOUR EDMONTON OILERS (against the Sharks)

Playoff numbers rarely become famous, it’s just a thing. The boxcars don’t have time to accumulate gigantic totals, while individual goals and stops are seared into the memory. I can tell you chapter and verse about the first goal in Game 5 1985 SCF, but hell if I know the final scoring numbers that spring. Numbers still have meaning, but, beginning today, it’s all about the journey to Stanley. San Jose and Edmonton met in the playoffs once previously, in 2006 spring. Edmonton won the series four games to two, and the numbers are long gone. The Torres hit and the Roloson save? Right here with me, forever.

Edmonton’s top line went 7-7-14 with 38 shots in five regular-season games against the Sharks. That’s good, real good, we can expect this trio to see a steady diet of Marc-Edouard Vlasic-Justin Braun. McDavid spent one hour against Vlasic (51.1 Corsi for 5×5 percentage) and that is the preferred matchup for SJS, while Todd McLellan appears content to let his horses run. McDavid v. Brent Burns would be fun, but the Sharks have allowed that match for 16 minutes all year. If the Oilers win this series, the 97 line is going to have a tremendous week. Note: According to Jake Sundstrom of Fear the Fin, Braun sat with a “nagging injury” in G82 but will likely be in tonight’s lineup. Sundstrom also predicts the Hansen-Hertl-Boedker will be matched against Edmonton’s top trio.

This trio is coming on now, we can hope these numbers spike. In the final 10 games of the season, Lucic (6-2-8), Nuge (3-6-9) and Eberle (6-3-9) have been on fire. Eberle had 32 shots in those 10 games, the line had 72 in total. Some strong totals for the group, if this line can score consistently we are talking about a possible final-four team in my opinion.

This line is emerging as the 3line now, and the last 10 games have been promising. Caggiula (3-3-6), Letestu (9, 2-2-4) and Kassian (10, 1-2-3) have been  coming on, separately and apart. Too soon to know, but Caggiula is showing some nice arrows. Kassian is going to have a big season next year if things continue along these lines.

This line is the misfits, but there is talent here. Benoit Pouliot has helped the PK and has offensive ability. Pakarinen is also used on the PK and has scored pretty well in limited minutes. Desharnais could be the last useful bat in the order, if he can get untracked. Lots of upset about Anton Slepyshev not playing, but Pakarinen is trusted on the PK and that appears to be the difference.

Based on practice yesterday, this might be the starting six for tonight’s game. I mentioned this a week or so ago, but the third pairing (and second line) might be the major stories (good or bad) in this series against the Sharks. Cam Talbot to start, no surprise.

As you can see, Logan Couture was front and center at yesterday’s practice, with wingers Melker Karlsson and Joe Pavelski alongside. How effective will Couture be? It’s playoffs. Trust no one. Donskoi-Marleau-Joel Ward and Hansen-Hertl-Boedker are pains in the ass as well. 4line of Haley-Thornton-Lebanc as listed here, will be interesting to see how many (if any) shifts we see from Thornton.

No one talks about this, but in the last 10 Oilers games, Cam Talbot has a SP of .889. That’s not a strong number, but when the team in front of you is scoring 38 goals in those same 10 games, not many notice. The Oilers have allowed 25 goals in those 10 games. Someone needs to hasten down the wind, this club needs a Moreau-Marchant-Grier unit badly.

Not a good run for San Jose, plus Martin Jones has an .882SP in his last 10 games. San Jose scored 25 goals in those games, allowing 34. The injuries to Thornton and Couture were a big part of the struggles, but can the Sharks put it all together in time for tonight? History tells us the playoffs expose injuries and weakness. Are the Sharks all hat and no cattle? My guess is no.

FROM THE OTHER SIDE

I remember 1987 for Stanley and the weather. On May 31, Edmonton won in Game 7 against the Philadelphia Flyers. Exactly two months later, Black Friday hit our city and had an enormous impact on all of us. For some reason, in my mind, those two events have always been linked. Funny how the mind works.

My prediction is Oilers in six, but the truth is we’ll know a lot more tomorrow. SJS have severe injury woes and are coming into the postseason looking cornered and with no wait out. My Dad always told me to be most worried when the other guy had his back up against the wall. It’s almost time.

Photo by Reggie, with my thanks

At 10 this morning, TSN1260, the first playoff edition of the Lowdown lifts off. Scheduled to appear: