This is going to an interesting summer in Edmonton. No matter how well everyone plays during the postseason, there are holes to be filled, cap issues to be solved, and an expansion draft that could take a good player from the roster. Free-agent signings and the draft, and of course making the playoffs will shorten the timeline to get things done. What will the McDavid contract look like? Draisaitl’s deal? Today, I want to look at the RFA and UFA deals still on the books, so we can understand that element of summer. 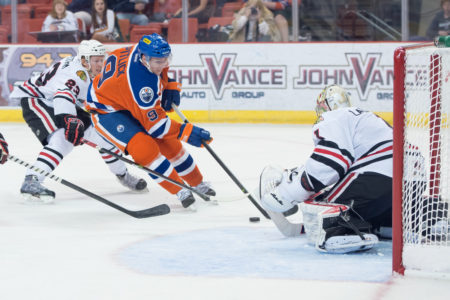 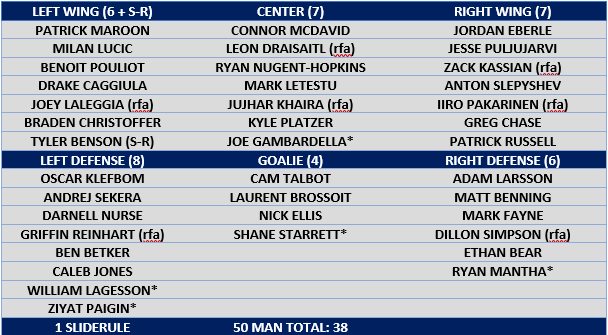 Leon Draisaitl is money against Chicago

Giraffes were created when Stan Weir gave a horse an uppercut

I see steve$ responded to Draisatl at 8M

We see increments of .06PPG being worth .375M over 6 years.
we see Added UFA years being .375M per over the length of contract.

Woodguy v2.0: There is no question that the lack of goals vis a vi the corsi can just be variance.

You can look at the CF and think “oh, its fine they’ll score”

or you can look at the CF and think “why isn’t the puck going in at all with all those corsis?”

Is Maroon’s SH% variance or is it influenced by injury?Dunno, but in the words of one of my Gords “That boy ain’t right”

As for the “focus on Defence” , the wingers are the least players in team defence and 67 is probably a better defensive player than 19 given their histories.36 gets around the ice better so if he’s positionaly sound, he’ll probably be better than 19 too.

What 5-6 years ago on Eberle’s sustainability.

See what working on your HD data base does for your thinking!

At least you understand why I thought you were smart but sooooo silly those years ago!

I see that Bill Scott slid down my chimney last night and left me a big ol’ Flames egg!

Let’s say CMD can still score at around a 3 GF60 pace against these two. This is off of his 3.53 GF60 pace in the regular season but still high, and quite high, in my opinion, when considering he’s matched against Vlasic. Let’s also consider the possibility that his GF60 in the playoffs against Vlasic is 2 instead of 3.

Let’s calculate the probability of observing 0 goals from CMD in a 30 minute stretch (so we have to take half the GF60 rate as our mean for the Poisson).

So, the odds are against observing 0 goals in both rate scenarios. If we go with the lower GF60 number, the odds are 2-to-1 against. Not great but also not ridiculous.

But, as you’ve noted before, goals in small samples are an unreliable measure of performance.

If we look at how that line is doing on Corsi, we see this:

So they’ve been playing more at the other end in the playoffs than in the regular season. They’re dominating Vlasic even though they’ve been tied or have had the lead for all but one second of the series so far. They just haven’t scored. But they haven’t been scored against either.

I don’t know about the Maroon looks hurt angle. Otherwise, I’d say we’re winning and Vlasic and the Sharks are just getting lucky. Vlasic also seems to be playing 5 fewer minutes at 5v5 than he played in the Cup run. I’m guessing because they’re saving him for the hard matchup. That forces the Sharks to play Dillon and Schlemko at 5v5 more than they’d like. That, as it turned out yesterday, is also good for us.

I’ll worry about goals when we don’t get goals that we need. Right now, it’s all about not giving up goals. We’re doing OK. So I’m patient. I think the odds with the CMD line-Vlasic matchup are in our favor. I’d stick with it unless (as TMac decided yesterday) we’re badly outmatched in the bottom 6.

There is no question that the lack of goals vis a vi the corsi can just be variance.

You can look at the CF and think “oh, its fine they’ll score”

or you can look at the CF and think “why isn’t the puck going in at all with all those corsis?”

Is Maroon’s SH% variance or is it influenced by injury? Dunno, but in the words of one of my Gords “That boy ain’t right”

As for the “focus on Defence” , the wingers are the least players in team defence and 67 is probably a better defensive player than 19 given their histories. 36 gets around the ice better so if he’s positionaly sound, he’ll probably be better than 19 too.

While I relish in many of the outcomes of the other series (except Wash-TML), we still have two more wins to get against the Sharks before we declare the oilers more than a playoff dud this year.

(Now I am off to Calgary Puck and HFBoards to drink the tears of dejected Flames fans!)

Soup Fascist: I feel bad for the Flames.

Flames losing at home after being up 4-1 proves they were a mirage team this season.

flyfish1168: Living in Calgary will be more tolerable today

Living in Calgary will be more tolerable today

Went to bed about 930 dejected. Woke up found out the Phlegms lost in O/T has put a smile on my face that can’t be wiped off. 🙂

I am going to Kyoto/Tokyo next week and I am in need of some hot tips. Went on your blog but I could not find a contact email (I am really bad at interneting)

Also I read your blog and it was so helpful I need more!

without a goiler ypu cant do anything?…listentng to gregors guy , the goalie guy he has on,he is so impressed with calms laterell movement..ii have noticed so many shots on Calm when he just gathers the shot in his tummy because he is in the right position..the guy is amazing!…stanley cup because of Calm Talbut

Hi Guys, and happy easter weekend….i had to work and drove my mother-in law back to sask..south of lloyd today..and back..i so loved to see the phlems trash that game….i was just thinking of the key to the oil…driving for hours…its Calm Talbot…just put an L in his first name..what do you guys think??..we are going to win the cup because of calm and he will be the conn smythe winner

Through some inside information I have, apparentl, the playoffs are Lindholms last chance to prove he shouldn’t be traded prior to the expansion draft. His source is good too, and I know he’s not lying about his source.

I had figured keeping Lindholm would be the Ducks number 1 priority heading into the expansion draft, especially at the end of last season. And I honestly still feel this way. Something about that information doesn’t make sense to me, but I know that he wouldn’t be saying this without his source telling him, he was just as surprised as I was.

oilersfan: Kent Wilson is saying on Twitter that Calgary had 37 scoring chances tonight

Was he the guy who counted first period hits for the Sharks yesterday? 😉

oilersfan: has a team ever had 5 more scoring chances than shots on net?

Well if a point-blank two on zero winds up with a missed shot, then that’s a scoring chance but not a SOG.

Also, for a team that allegedly dominated the ducks, they lost 5-1 when playing 5×5 so there is that narrative including actual facts to be considered when claiming it was a dominating performance but just unlucky…I believe 5×5 shots were around 27-22 for the ducks so again not really that dominant.

How does a team lose when they get 5 power plays to 0 for the opposition and score on 3 of them?That can’t ever have been done before. Incredible.

I wonder how many chairs Treliving broke tonight?

I feel bad for the Flames. They worked their asses off for 39 minutes taking full command of the game over the Ducks. Monahan is scoring. Bennett with a hard but clean check on Bieksa. Then to have it all undone by a terrible non-call on an obvious high stick ……

Well with the pseudonym that I am using, on behalf of oilers fans everywhere allow me to say this:

Suck it Calgary. Suck it long and suck it hard.

The Calgary call in shows will get a million calls tonight but I wouldn’t want to be one of the sponsors with all the wrath of a million heartbroken fans swearing never to use “Pete the Plumber” with his ad on every second commercial . It will be associated with heartbreak and despair of an epic proportion for decades after this near apocalyptic collapse.

LMHF#1:
Washington in full-on choke mode. Wow. If they manage to lose, does anyone think the GM has the guts to switch out a bunch of parts?

You mean the new incoming GM?

Corey Perry was a +5 tonight in a 5-4 win, that’s pretty impressive. Weren’t the Ducks missing their top 2 D-men tonight, on top of the gratuitous penalty calls in Calgary’s favour?

Bad thing is, this is less time for the Flames to beat the Ducks up most likely.

On the bright side, fuck the Flames.

Only if they promise the position to Conan O’Brien first.

Hawks to win 4 in a row to advance. Backs flush against the wall now

This gets a full on belly laugh hahaha

Oh and Chicago completes the collapse. Hawks on the ropes!

Only if they promise the position to Conan O’Brien first.

Do the Flames have the option to replace Gulutzan with Jay Leno before overtime starts?

I politely request that you keep the pictures from my hacked smart TV to yourself.

Flames get 5 Powerplays to the Ducks 0, get three PP goals, and Anaheim still gets the game to OT.

The league is literally trying to give them this game and they are fucking it up.

JDI Хоккей: And I’m reasonably certain that Benning doesn’t know what Skype is.

or what if he does know and asks to do the interview over skype?

Ralph: “You know what I’ll just fly to Vancouver and we can do this in person how about that? Something about face to face interaction just makes me more comfortable is all…”

JDI Хоккей: And I’m reasonably certain that Benning doesn’t know what Skype is.

he would be good for the Goldobin’s and the Baetschi’s of the world. Jmo.

Yes he can teach them the 0 man forecheck that made him “successful” in Switzerland and motivate them in 3 languages. It is a no-brainer to hire him.

Chachi: It is the perfect fit.

And I’m reasonably certain that Benning doesn’t know what Skype is.