Canadian hockey fans get a lesson in ‘framing the issue’ every time any network plays a 1991 playoff game between the Calgary Flames. Why? They run the damned Theo Fleury overtime goal from game 6 (Sunday April 14) instead of the Esa Tikkanen overtime goal from Game 7 (Tuesday, April 16). It’s completely ridiculous, but I see the Fleury goal 50 times a year, and have to play my CD to see the Tikkanen goal (and I do, while laughing like an idiot). This kind of unfair play is duly noted in my home and I hope it is in your home, too. Fair is fair, jackasses!

The Oilers beat the Los Angeles Kings (and Gretzky’s Oilers Pacific) in the second round, the sixth and deciding game put to bed by Craig MacTavish in overtime (another obscure piece of video). The Minnesota North Stars, in those wonderful uniforms, ended the run in five games during the Campbell Conference Finals. Mark Messier scored the final goal of his Oilers career in the final period he would play for Edmonton, assists to Glenn Anderson (fittingly) and Craig Simpson. The Messier Oilers were powerful, vicious, talented and determined. The man was a rock on skates and I miss this team because of him most of all. Box scores are here.

The line has just one goal (McDavid SH) and one assist (McDavid PP) through four games. Corsica.hockey tells us this trio is over 50 percent Corsi for 5×5 (97 is 52%) but in the 40s on the Fenwick scale. Far too soon to have any real value, but I pass it along because it’s there. Maroon’s 10 shots in four games is a solid number, Leon needs to shoot more. If this line can’t get it going, it behooves Todd McLellan to change up the lines pdq.

This line has one goal (Lucic PP) and two assists (Lucic, Eberle, both at evens) through four games. Not good enough, but this trio should remain together. A total of 22 shots in four games is a solid number for a 2line. All three men are over 50 percent Corsi for 5×5 through these playoffs so far and would be (imo) a fairly easy choice for top performing line.

This line has two goals (Kassian SH and Kassian EV) two assists (Letestu PP and SH) the next mayor of our town (Kassian). The shot total over four games is strong, but Letestu gets PP time and that skews things a little. Still, the 3line has 24 shots and that leads all lines. Impressive.

This line has no points and are hovering in the mid-40’s in possession. I like both wingers, and Desharnais clearly has enough skill to get some good opportunities in the offensive end. The other options available to Todd McLellan (Iiro Pakarinen, Matt Hendricks, Jujhar Khaira, Joey Laleggia, Anton Lander) may see playing time in the coming games.

October 5, 2013: The Oklahoma City Barons play the Charlotte Checkers in an American Hockey League game at the Cox Convention Center in Oklahoma City. Photo by Rob Ferguson, all rights reserved.

This tandem is performing better at shots against per 60 5×5 compared to the regular season. Oscar Klefbom (29.30) and Adam Larsson (29.77) are both more efficient so far against the Sharks compared to all year against all 29 teams. Oscar Klefbom has an even strength goal (the first of the series) which represents the only offense from this pairing so far in the postseason.

Sekera (27.93) and Russell (28.00) were far more effective during the regular season than they are currently.

Nurse is tracking better than his regular season (32.89), Benning (27.81) is also miles ahead compared to his (impressive) regular season numbers. Gryba (31.52) has been more effective using this method of measurement compared to the regular season. As above, sample size is not close to good enough, but we are discussing early trends. 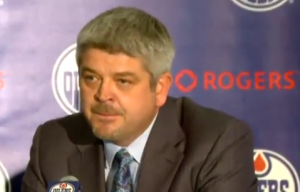 There’s a lot of story to cover in this series, and tonight is a pivotal game. The San Jose Sharks delivered a massive body blow in Game 4 and we don’t know if the Edmonton Oilers can answer back. The club seems completely undisciplined and are not responding well to the Sharks disdain (San Jose veterans don’t respect the Oilers, likely due to years of hammering them into little pieces). Respect must be earned, and a win tonight would go a long way toward earning that respect.

For me, the key tonight will be discipline. Edmonton has shown very little ability to learn from their own penalties during this series and that may be the most alarming part of the enterprise. I understand the concern over 5×5 scoring, but history tells us that will begin to flow at some point in time (although in a short series, “some point in time” could be October).

I predict a loss tonight if the Oilers can’t stay out of the penalty box. Edmonton could win this evening without 5×5 goals, but the club can make life easier for itself if two goals cash in the discipline. There is genuine concern (for me) about the health of 97’s linemates, and Todd McLellan should not hesitate to shuffle the winger deck in order to get things done. If San Jose gets a lead, flushing the fourth line should also be an option (depending on how they are playing).

If McLellan draws on some smoking aces, one hopes we see Lander but one suspects it will be Matt Hendricks.

Whatever you’ve done on game winning nights, you have to do it this evening. If it’s cooking a turkey, haul ass to the turkey store. If it’s drinking Freshie, giddyup. I’ll be cleaning the gutters again after 5pm tonight because that’s the job, man!

Tonight is a lot about McDavid, of course every Edmonton game is a lot about 97. The Sharks have wiggled their way inside the Oilers collective, with predictable results. Young teams take time to adjust to shifting sands, an example being the way officials are calling these games.

If you check the comments section of this blog over the last few games, there are countless examples of frustration over the uneven refereeing. “There’s no way this is even” or “the Oilers are being judged on a different scale” can be heard over and over again.

You’re right. Them’s the facts. Veteran teams get the calls, upstarts get the shaft. It was like that when I started watching NHL hockey in the 1960s and it’s been that way since. The young Oilers are on the verge of losing a series learning that lesson. It’s happened before.

My money’s on McDavid finding a way. You?

WHAT A WONDERFUL WORLD