I decided late in the regular season to let the playoffs wash over me. It’s been a long time, I was a man in my 40s in 2006, the grey on my temples barely noticeable (but working hard). Now? Grey has taken both temples and moved troops to every quadrant, to the point where grey hair (which is akin to copper wire) is there to greet me morning, noon and night. I don’t give a damn about grey hair, or aging really (although it would be nice to hang around to see how the kids turn out, and to spend more time with Mrs. Lowetide). I do care about the things I love, and one of them is the grace, length and beauty of a hockey season. I am enjoying the spring like a long lost friend, and in many ways that’s how it feels.

The 1991-92 season was rife with pain and disappointment.

Opening night, you needed a damned program and that’s for sure. Edmonton had good forwards (Vincent Damphousse, Joe Murphy, Craig Simpson, Esa Tikkanen) but no one to push the river, not like Messier. Defensively, the Oilers were a rugged bunch bordering on filthy. Dave Manson and Luke Richardson played major roles, with Kevin Lowe still hanging around to provide veteran leadership. Billy Ranford was the goalie. We traveled to Mexico that winter, I didn’t check the scores for any of the 14 days we were there. I remember thinking they might as well trade Esa, Lowe, Ranford and Simpson, and they basically did over the coming months. It was a mess.

The Oilers did win some playoff games with this congregation, and I liked Joe Murphy and Martin Gelinas (and others) among the youths. Edmonton beat LAK in six games, then Vancouver in six (Ranford was stellar in that series iirc) before losing to the Chicago Blackhawks in a Campbell Conference sweep. Source

The Oilers are 1-1-0 on the road during this series, winning a tight-checking affair and getting blown out 7-0. I think the Oilers win tonight if the two teams are tied after two, and the biggest test is likely to be in the first 10 minutes of the game. Stay out of the penalty box!!!!

Scored a great goal (it was the winner) last night. Highlights are here. 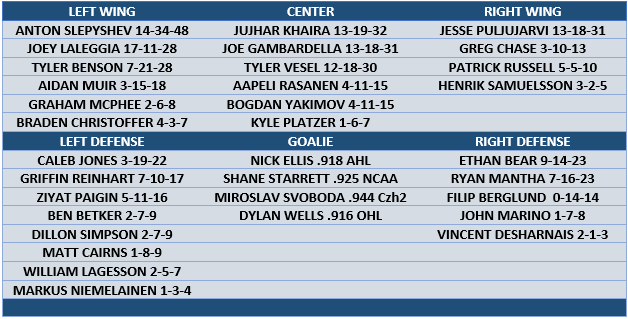 Spencer Foo may announce his decision this weekend, if he selects the Oilers his placement on the depth chart will be interesting. For next season, I think Leon Draisaitl stays at RW, meaning Jordan Eberle and Jesse Puljujarvi are the top candidates for 2R. After that, Zack Kassian would grab a spot and then it’s wide open for Anton Slepyshev, Iiro Pakarinen, Tyler Pitlick and others. I think Foo is a solid prospect, but would guess he would have a chance to make the Oilers opening night lineup. His NHLE (31) is shy of Drake Caggiula’s (44) when he graduated, but Foo could surprise and of course it depends on who he plays with when Foo gets here.

One of the things we are seeing this spring is young men getting NHL playoff experience. It will pay off next year and in the years to come. The three young defensemen are learning on the job and if the team can use them while winning a series or two, bodes well for the future.

In dealing Brandon Davidson for a rental, the Oilers reduced their 50-man list for summer by one and guaranteed another name will be lost in the expansion draft. Because Oilers fans (like me) are still working in the small market world or pre-cap and pre-Katz, that runs counter to team building. However, the Desharnais overtime goal also represents another important area of team building: Success. We may see the fruits of that success this weekend, should Spencer Foo decide it’s Edmonton. Connor McDavid changed everything, but having playoff success will go a long way to turning around the Oilers reputation and making Edmonton an attractive destination.