On the day he took over the Edmonton Oilers, Peter Chiarelli knew Connor McDavid would be part of his new team by the fall. The young center would be added to Ryan Nugent-Hopkins and prospect Leon Draisaitl, the trio possibly becoming a formidable 1-2-3 combination down the line. The trick, of course, was to build up the middle at the other positions without compromising the quality and depth at pivot.

Chiarelli added goalie Cam Talbot, and defenders Andrej Sekera, Adam Larsson, Matt Benning, Kris Russell. He also got Oscar Klefbom’s name on a real value contract. All of those things without compromising the center position and its magnificent future.

Turns out, coach Todd McLellan likes to run Leon Draisaitl on 1R with McDavid, making it necessary to find a legit center-wing to slide up and down the depth chart as required. That’s one (of two) major procurement items for the summer. That ‘need’ dominates the forward list this summer.

I am looking for forwards who cost less than $6 million per year and (hopefully) can be used in the face-off circle. 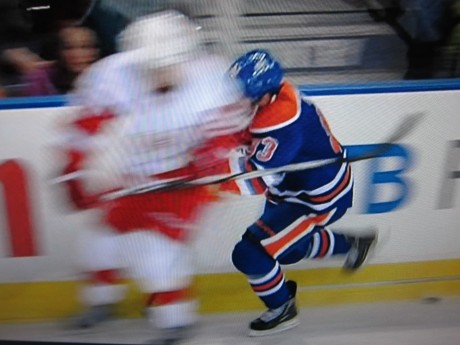 I haven’t added names like Joe Thornton and Patrick Marleau, because it seems unlikely the Oilers will be able to afford shopping in that end of the pool.

This model has the Oilers signing free agents Martin Hanzal and Jan Rutta, while dealing Jordan Eberle for Jason Demers. That’s a good deal for sure, Bob mentioned it on his show (in fairness, the first person to mention it to me was speeds). The Oilers are eventually going to find a volume shooter for McDavid and that’s probably next step, 2018 summer.

I’ve been looking for this all winter and spring, finally found (thanks, Todd Cordell!). It won’t change much in the final rankings, but Cole Guttman will be added to my list.

It was awesome. Just five years after entering the league, the Edmonton Oilers brought Stanley to the west. It was surreal and beautiful and it took forever to put it into context. Man, what a feeling. I remember so many things about that game, the most prominent recall being Kurri to Gretzky for the game’s first goal. I have described it in detail here many times, from the mind’s eye and memory. It is here, still gives me chills. Ridiculous to witness those years plus the McDavid future. Blessed.

Today at 10, TSN1260. A fun show, lots of entertaining guests. Scheduled to appear:

96 Responses to "BUILDING UP THE MIDDLE"