Jesse Puljujarvi hurt his knee earlier today, and there was some concern (I was concerned) about the young man’s status. Late word this morning has him fine.

Peter Chiarelli described Puljujarvi’s season at the exit interview a few days ago, and the frustration from player and organization was clear. However, all is not lost and there are encouraging signs. In a thoughtful recent piece about the big Finn, Oilers Nerd Alert wrote the following:

Puljujarvi’s first NA season was neither poor or strong, and when thinking about a young man (18) playing against men that’s probably predictable. There are some good things, and perhaps some innocence (with an explanation). Bruce McCurdy pointed out the other day on the Lowdown that Leon Draisaitl went back to junior and dominated. Puljujarvi lost confidence (while scoring a goal and seven ‘first’ assists) and was sent to another high performing men’s league. Let’s (once again) compare JP to Mikko Rantanen and David Pastrnak in their AHL debuts:

Pastrnak was younger in his AHL debut, Rantanen was 112 days older than JP when he made his AHL debut. I’m not sure age gap can be used to explain the offense. One final item before we move on: even-strength scoring, just to check (and maybe expose a friendlier view of our Finn).

The shots-per-game total is encouraging and may indicate JP played in some poor luck this past season. One area we can’t examine closely is linemates, and I do think there is a case to be made for Puljujarvi there. Not playing him with Anton Lander didn’t make a lot of sense, and that’s with due respect to Josh Currie who had a fine season. I will also tell you that confidence has been mentioned (remember, this is a young player) and more than one mention of ‘looking lost out there’ has been trumpeted at the WHC’s. This young man may need a mentor as a center upon NHL arrival and the Oilers should be able to provide one. 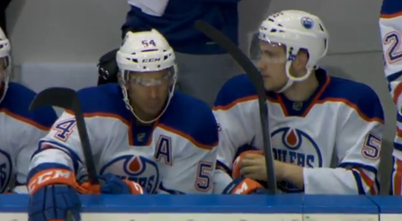 Jujhar Khaira is one of several prospects who will require waivers this fall, meaning (in the words of Elvis Presley) it’s now or never for the young man to make the NHL roster for good. Jesse Puljujarvi won’t be waiver eligible this fall, not Anton Slepyshev, nor Drake Caggiula. That’s the task as I see it for Khaira: Find a way to stay on the roster. I am hoping he can do it, and show some offensive ability (6-10 goals) in a 4line role.

The Oilers rookie crop of forwards in 2016-17 (Puljujarvi, Caggiula, Khaira, Slepyshev) are an intriguing group who have a lot in common. Good speed, three of them have good size and Khaira has a terrific mean streak that will hold him in good stead. I think they will all be wingers eventually, but we’ll see. Only Puljujarvi (in my opinion) holds promise as a quality goal scorer at this level (25+).

I’m reminded of Bill James and his 1986 Abstract. That year MLB had an incredible crop of rookies, with the NL (Barry Bonds, Greg Maddux, Will Clark, Benito Santiago, Barry Larkin) offering stunning talents at the top. The National Leaguers all had a range of skills, and Bonds is the best player of my lifetime. James lauded the rookie crop in that league, but sounded the alarm for the AL crop (which included Jose Canseco, Ruben Sierra, Pete Incaviglia, Cory Snyder). Why? Although the bats were fantastic, there wasn’t much defense and the power hitters struck out a lot. James was right (although men like Fred McGriff and Mark McGwire would emerge as HOF calibre hitters) and the NL crop far exceeded the American League.

I think this rookie crop of Oilers forwards are going to be remembered for shy bats. It’s possible, maybe even probable, one of these wingers grabs a job with McDavid or Draisaitl and scores goals by association, but as a group I don’t think the goals are going to save them. Jesse Puljujarvi alone can save the lot of them. Let’s hope this knee injury is nothing really.

Kris Knoblauch is the coach of the Erie Otters and a good guess has him coming to the Oilers organization this fall. The Condors may need a new coach and the local media (Bob, Jim Matheson) seem to be pushing his name forward. Is there a match? I have long felt the Oilers needed to hire someone more interested in development than winning, but that’s a gripe impossible to prove really without time-on-ice.

Our friend from Oklahoma did wonderful work again this winter and gave us estimates for time-on-ice and points-per-82. Here are the forwards (over 25 games, sorted by TOI):

If those numbers are true, Gerry Fleming (or Chris Knoblauch) probably want to play the prospects a little more. Jesse Puljujarvi has had a tough season but his struggles (and boxcars) could have been helped with more time alongside Anton Lander. In my opinion.

THE HEAT IS ON!

69 Responses to "PARIS IN THE SPRING"