The Edmonton Oilers enter the 2017 draft under unusual circumstances: They will be sitting in the fourth row! The club’s first pick comes at No. 22 and there is no second-round pick this year (yet) so it’s very important to hit the jackpot with the first selection of the weekend.

We can’t know what the Oilers list looks like and in a year like this one the range could be very wide. I posted my Top 150 for the draft and there are all kinds of sources out there to offer opinion. The big difference this season, especially among forwards, is foot speed. There is no dominant player at the top, let alone at No. 22 overall. What about trading No. 22 overall? 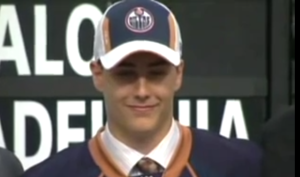 Maybe Peter Chiarelli will be offering Griffin Reinhart in exchange for LV choosing Benoit Pouliot in the expansion selection. McPhee likes those big WHL defensemen (drafted Jeff Schultz, Mike Green and Karl Alzner high a decade ago) and I bet Reinhart is at least a discussion point between the two general managers.

Despite what was mentioned above (trading No. 22) it’ll be fun to see what happens if Edmonton is still on the clock when that pick comes around. It could be traded (NJD have No. 36 and No. 63) for extra picks or the Oilers could use it.

What if the Oilers list this season is devoted purely to skill forwards? What if, no matter size nor foot speed, Edmonton chose a skill F at every turn? I’m going to use Future Considerations Top 100 as a guide since it’s already out and public.

That’s a lot of forwards and some of them are overagers. If the Oilers draft all forwards, and stay on skill, they should be able to identify a couple of keepers.