On the morning of June 29, 2015, in the hours before Taylor Hall was traded, I wrote an item for this blog called “Approaching Unicorns“. If the Oilers trade for Brent Seabrook today, I promise never to use this title again. The post on 29 June last year discussed Jesse Puljujarvi as a scoring option, Milan Lucic as a possible free agent, and Edmonton’s roster producing three scoring lines. Approaching unicorns.

One year on, the dream may well be farther away, as there are more questions about the young forwards on this roster:

No. Peter Chiarelli did acquire a truckload of old people while in Boston, though. The game has changed and changed again since 2006 and speed is more important every year. Seabrook gets caught flat-footed often nowadays and his contract is so acidic that even trading Benoit Pouliot and Mark Fayne for him straight up would be a massive loss for Edmonton. No sir.

WILLIE, MICKEY AND THE DUKE

Do you remember the days of Petry, Chorney and Wild? Long before the blog posts with titles like “How is that crazy trade going?” I was monitoring the progress of three college defensemen (here’s an old post as an example). The mystery there is over, as Jeff Petry (445 NHL games) pummeled Taylor Chorney (141 NHL games) and Cody Wild (no draft pedigree) couldn’t get out of the starter’s blocks. So Petry will play 1000 games, Chorney has probably played most or all of his, and Wild is now coaching.

We have a four man race from the 2015 draft, and I’ll bet you we get at least two who play in an NHL game at some point. Caleb Jones, Ethan Bear, John Marino and Ziyat Paigin have progressed very well since draft day, and the strength of that year’s draft suggests a third-round selection is probably equal to a second rounder in a normal year. Will any of them play 445 NHL games, as Petry has already? That’s a high hill. We’ll see.

If that race is the Petry sweepstakes, then the 2016 draft may be the Cody Wild Derby. In the third round of the draft this past season, Peter Chiarelli and the boys drafted three defensemen and two of them had some issues in their draft+1 season. Here’s a quick reminder.

Berglund had a good year by my estimate, and I’m encouraged he is going back to get increased ice time in the same spot. Niemalainen is the most famous prospect in the group, we spent quite a bit of time on him a year ago (he compared well in some elements to Logan Stanley). I would say he is clearly behind Berglund today but would also add his size and speed give Niemelainen an edge long term. Cairns is not yet in photo. 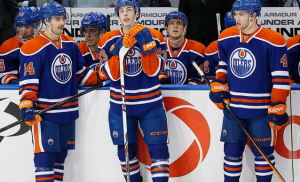 My guess is that Peter Chiarelli is shopping Jordan Eberle now, and this is the period a year ago where we were hearing “Nuge for Dumba” rumors. If Eberle doesn’t fetch a worthwhile return, the smart play of course is to keep your powder dry. The issue for PC is that he may not have a lot aside from Eberle to offer this year. If he is willing to dangle Nugent-Hopkins, the discussions become more interesting, but is he willing to do it?

After those two men, it’s the department of youth, represented by names like Jesse Puljujarvi, Anton Slepyshev, Caleb Jones and Ethan Bear, and by numbers like No. 22. I wish there was another answer (if there is, it’ll be a LHD) but the fact is other NHL teams appear to be shopping more prominent names than Jordan Eberle.

It’s a good time to remind ourselves about how important the Nuge is/was to this organization. Here is his player card from this past season. Notice the percentage of time spent against elites (via Woodmoney):

In his first three (non-lockout) seasons, Nuge scored 50+ points. In the two years since, he posted 34 points (in 55 games) and 43 this past season. Some of that has to do with usage (less power-play offense) and some to do with injury. The usage portion (42 percent of 5×5 time against elites) is approaching Horcoff levels when he was stone alone. Nuge is too valuable to trade. His offense is way below what you should expect from a $6 million man, but the fact is his power-play totals were always a major factor in what he posted. Less time on the 5×4 means points totals in the 40’s. Is he worth the price? I think he is, for this team, and hope Chiarelli doesn’t deal him. That said, he is the one player who can fetch the kind of RHD Edmonton may need to add over the summer. What this team needs is a pro scout who can identify a Steve Staios or a Jason Smith. Is that player Alex Petrovic? We wait.