We’re on the edge of the major eruptions of summer and it seems as though this is going to be a fortnight to remember. The new Las Vegas team appears to be igniting all kinds of activity and changes in the weather. How will that impact Edmonton? We know the club has less to lose in expansion than some others (Minnesota, Anaheim) in the Western Conference, mostly because of the long list of players ineligible for the draft. We also know that the club is going to be even more top heavy this fall due to Leon Draisaitl’s increased contract and possibly other major additions. 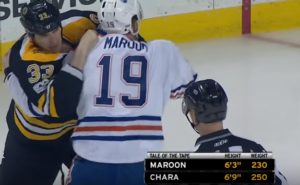 Chara has a cap hit of $4 million and this is the final year of his deal. As a replacement for Andrej Sekera there is some appeal and even the cap number is somewhat manageable. The Woodmonies indicate the big  man still plays an enormous amount against elites and the Dangerous Fenwick is exceptional considering how much he is playing elites at 110 years old. Speed is an issue for sure, but as a trade option he’s worth discussing in my opinion. Maybe Peter Chiarelli can get that second-round pick back while he’s at it.

The Oilers are going to need a strong AHL team in Bakersfield, to cover for injuries, slumps and the top heavy cap disallowing veteran mid-level options. As we approach free agency, it might be informative to look at current projected Condors under Edmonton’s control.

Clearly more men will be needed, and there could be additional players from last year’s team. Jordan Oesterle, Dillon Simpson, Henrik Samuelsson and Joey Laleggia could sign and be used as AHL options with callups possible. This team needs help at AHL center and that’s a fact.  Spencer Foo could be signed as a college free agent, and the Oilers could draft overagers who could come to pro right away.

I introduced a list of CHL overagers a few weeks ago and today I’m going to have a lash at the European players who are at least second-time eligible. I like the Finnish goalie Vehvilainen.

The Nation Network (Oilers Nation, Flames Nation, etc) is absolutely coming out of their shoes during their current draft profile at bats. Brilliant stuff, I have to say gents like J.D. Burke are raising the level of analysis and should be applauded for fine work. The rankings have Owen Tippett at No. 13 overall (here) and that may be good news for the Oilers. Tippett is the best volume shooter in the draft (well, he or Eeli Tolvanen) and if he falls to mid-teens perhaps there is a trade up possibility. I recommend reading Burke’s profile, terrific work. I have Tippett at No. 3 overall in this year’s draft.

Keep hearing that #NHLBruins may very well expose Colin Miller in #NHLExpansionDraft but he's not a Gerard Gallant type player so?

Colin Miller would be another interesting addition for the Oilers. He had a good season in Boston, I had him on my possibles list one year ago. He could be a solid addition, no idea what the ask might be but worth pursuing.

Should Preds go the 8-skater (4 D) protection route, which is likely, it's possible W James Neal gets exposed. Not for sure, but possible

Volume shooter! Neal posted a 9.04 shots-per-60 total this past season and that’s a solid number. Final year of his contract, a fine plug-and-play option if the price is right. Contract is $5 million large. Great release, has scored 20 or more for several years in a row.

Ilya Kovalchuk was a star when he left. Years later, how much can he really contribute? (I argue quite a bit.)https://t.co/9vsDHD4hZ5

Yost is one of the best at evaluating questions based on math and reason and delivers a compelling argument for Ilya Kovalchuk as a short-term option. Edmonton should be interested, this is a volume shooter who could post a big number alongside Connor McDavid. Do the Oilers have the cap room? What would the cost be to the organization (getting him out of NJ)? Interesting option.

THIS WEEK IN THE OILERS

I wrote last night about the Oilers possibly making a move this week to improve the club before expansion. If names like Jared Spurgeon and James Neal are out there, suspect the possibility exists of a trade before this weekend and the expansion protected lists being submitted to NHL head office. The business of summer could be over quickly. I’ll have updates if things get crazy.