I have this working theory that history is about to repeat itself. Remember when we talked about Frank Seravalli’s list at the beginning of June 2016? That list is here, and the Oilers were ranked thusly:

That was the June 3, 2016. Edmonton had four of the 18 names on the list and the commentary was Edmonton-centric.

He might have been the logical choice but the Nuge apparently didn’t turn the needle enough to get Peter Chiarelli’s defensive fix. By the morning of June 29, 2016, the list had changed:

On the exact day he was dealt, Taylor Hall appeared on the list and there was clearly something going on around Nail. The amount of work that goes into these things must be exhaustive and credit to Seravalli (and others) for moving Hall up by the end of the month and his trade. Based on the way he conducts business, suspect the rankings received no aid from Peter Chiarelli.

The trade bait list gave us a road map on what was a series of moving targets throughout last spring. The No. 4 pick was in play until Jesse Puljujarvi fell, Hall then entered the conversation (around the draft) and the deal was completed right at the end of June. At the beginning of the month, if we believe this list, Hall was not a front runner for trade.

This June, the early list had Jordan Eberle at No. 6 and no other Oilers player listed. Two weeks later and Mr. Seravalli has Mr. Eberle at No. 3 and no other Edmonton player appears. Maybe we see a trade today, but on the other side of the expansion draft I wonder if the Nuge arrives at No. 4 with a bullet. The Fourth Period has Carolina, Montreal, Columbus and Detroit asking after 93.

I have to say, on this day at least, all signs point to sail on, Regina Patricia.

I am breaking my 24-hour rule so please click on the link, I assure you there is more interesting content there. Helluva article and the first big news of the weekend. The Golden Knights may walk away with a prospect, No. 24 overall and (say) Ryan Murray. They won’t take any of the top end talent the Blue Jackets must expose and they will be taking on Clarkson’s $5.25 million times three years deal. 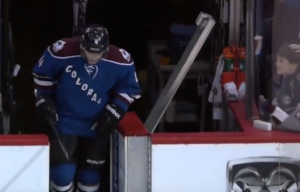 I would prefer Travis Hamonic by some margin, there there are things to like about this player. First, he puts up points, 31 of them away from the PP this past season. He has chaos to his game, and didn’t play 33 percent of his time against elites, but his DFF rel isn’t wacko compared to the rest of the group. Overall Corsi 5×5 is good, actually, considering the team. I suspect you’d be looking at a spike in goals and power-play points for Barrie in 2018-19. If you get him for Eberle (I still think the Avs would prefer Nuge), the top 6D opening night might be Klefbom-Larsson, Russell-Barrie, Nurse-Benning. Then again, maybe trading for Barrie prices Edmonton out of the Russell marketplace. I’ll tell you one thing about Barrie: You’ll have enormous reaction to his play. He’s got a lot going on.

No. Money’s too tight to mention. Yes to Mika Zibanejad, though, all day. NYR are looking for a top pairing RH blue for Mr. Stepan. Tough to find. Source

Today at noon on TSN1260, Paul Almeida and I will host a mock draft! We’ll have a 1-30 format, and guests popping in to make selections. Here is the lineup at this time:

All ties will be broken by my list (which appears here) and just for fun I’ll publish the top 30 names: