I had an interesting conversation today, idea being the Oilers were pretty much done. Folks, I’m staring at the 50-man list and seeing 40 names, so that’s not it. What is going on here? Well sometimes it helps to see how both pro rosters (Edmonton and Bakersfield) are shaking out. 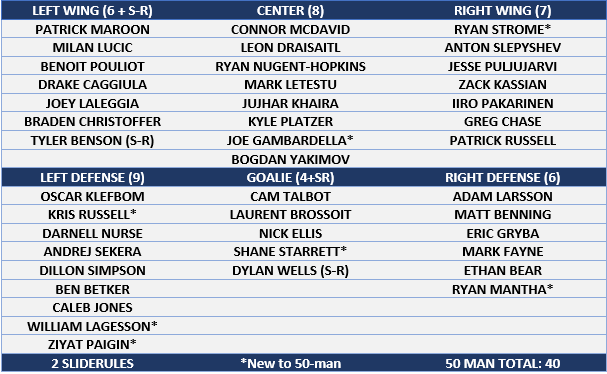 The Oilers often run 47 or 48 deep on the 50-man, meaning we are going to see additions to this group. Who are they? Well, the cap number plus the fact Connor McDavid and Leon Draisaitl don’t have contracts tells us we are looking at less expensive options and possible mid-July options. College free agents and CHL grads may get NHL deals this year, too.

If it seems like Drais. camp is playing hardball, remember year 1, he was sent down before 40gp, keeping him from earning a year towards UFA

Ryan Rishaug is killing it during the draft/free agent weeks and this item qualifies as a bombshell. In this morning’s post I wrote the following:

I think that’s about right, not sure the value Peter Chiarelli places on his big center. I threw $9.5 or $10 million out, that might have been high but who knows? If Leon comes in at $9 million that’s an overpay, in my opinion. I’m not suggesting you prepare for imminent departure of the big man, but the closer we get to Saturday might be an idea to check out Rishaug’s twitter page. I don’t see this lasting into next week one way or another.

The Department of Youth

(Cap) Room with a view

Burning Down the House