Drake Caggiula is fast and small, and seems to get a lot of chances. Will he cash more next season? Anton Slepyshev has a heavy shot, the Rogers Place boards make a distinct sound when the bullet hits the bone. Jesse Puljujarvi is a giant who can skate and ramble, if he ever finds a way to score goals we’ll sing in the sunshine, we’ll laugh everyday.

How, pray tell, can we tell which one of these men is going to be ‘the one’ to play alongside Connor McDavid for the next decade? The answer: We do not know, it has to play out. And this just in: It might be Kailer Yamomoto, or Ryan Strome, or Joel Farabee.

There are indicators. Jesse Puljujarvi has the draft pedigree and the resume. He also has youth, being a teenager and all. Caggiula and Slepyshev have an advantage that comes from being here and being old enough to possibly get first lash at the job. It don’t mean a thing if it ain’t got that swing. 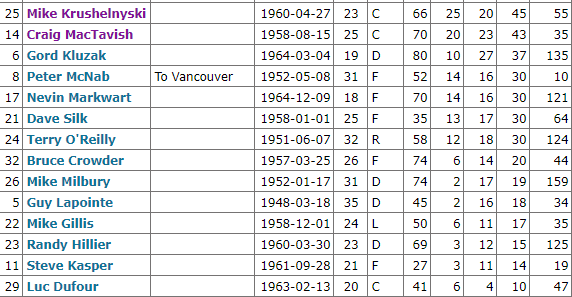 In the fall of 1983 the Boston Bruins had a logjam at center and very little depth on left wing. It is in a very real way similar to what is going on with the Edmonton Oilers currently (strength at center and very weak on right wing) and I thought it might be interesting to see how they handled it.

The Bruins ended up breaking camp with MacTavish, Dufour, Markwart and Krushelnyski on the roster, and here’s how each of their careers progressed:

This fall, if Peter Chiarelli doesn’t add any veteran help up front, we’re going to see a bunch of youngsters getting 600 at-bats. This is bad. Why? Well, some of these fellows will work out and others will not and we simply don’t know who’s who.

We’re going to see a lot of additions over the coming weeks. Many will be AHL-calibre talents but there should be room for at least one significant add for the NHL roster. Buying out Pouliot to remain idle makes less than zero sense to me.

Even if you hand Leon Draisaitl a contract with $9.5 million as the cap, Edmonton should have $5-6 million to spend in free agency. I’ve compiled lists all down the line here leading up to tomorrow, basing them on what’s out there and what Edmonton might be interested in. Thought I would give you my list (in order) of the available free agents.

Vrbata is a very good fit on a one-year deal and could end up  filling the net alongside Connor McDavid. If Peter Chiarelli bought out Benoit Pouliot to sign Vrbata, you won’t hear me complain. I suspect he is aiming higher (Marleau) but that isn’t necessary.

I actually like Yohann Auvitu most among the blue, but he’s a lefty. Folin is a bet, not a sure thing, but he’s a reasonable bet. Cody Franson is more of a sure thing and I would be pleased to see him as an Oilers addition tomorrow.

Brandon Pirri is like cup-of-soup for scorers. It may not be a banquet but it does the trick and is surprisingly satisfying. Parenteau has slow boots or he would be higher, Stone I’m just not sure of, Grigorenko has always intrigued me and his season had some good things inside. Pitlick I have always liked but suspect he’s gone and Chiasson is a Chiarelli player so I kept him. I didn’t have Jordan Oesterle on the list but like him plenty. It’ll be Patrick Marleau and or Drew Stafford.

172 Responses to "KISHI BASHI (THIS MUST BE THE PLACE)"