This is Ryan Strome. Peter Chiarelli brought him in as a cost effective replacement for Jordan Eberle, or so he hopes. It’s a bet, just like everything else in life. That sounds cynical but it’s true. Based on all we know, the Islanders got the better player and the Oilers saved $3.5 million. We have a tendency to throw shade on deals we don’t like and then move on, never bothering  to go back and review our own thoughts one year later. At least for today, let’s correct that mistake.

The rumored ask at the time was Leon Drasaitl, a defenseman (Oscar Klefbom or Darnell Nurse, never did get confirmation) and a flip of first-round picks (Oilers sending No. 4 to Montreal for No. 9 overall). One year on, would you trade Leon, Oscar and Jesse Puljujarvi for Subban and Mikhael Sergachev? Humility is a good idea in all things, especially when luck can have an enormous impact. As it turns out, Leon alone may pack a $9 million annual wallop by fall. 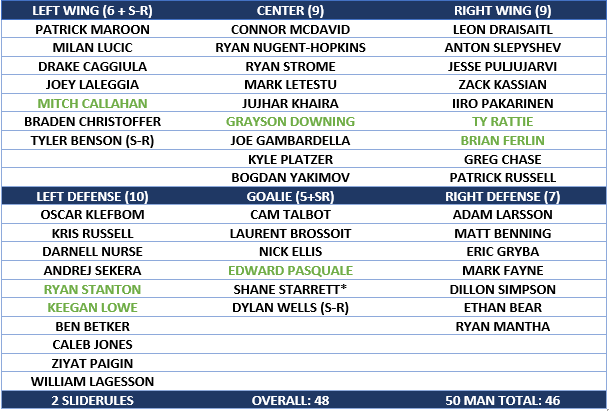 The problem with the world today is there isn’t enough oxygen to have a conversation. If I say “Scott Howson” someone says “Nikitin! Nuff said” and then the conversation drifts to something else. Howson should have been fired on merit for that crazy Nikitin trade/contract, but his resume suggests some real quality in amateur procurement.  When he was GM, the Blue Jackets drafted Cam Atkinson in the sixth round in 2008, David Savard in the fourth round in 2009, Ryan Johansen in the first round in 2010, Boone Jenner in the second round in 2011. I’m not saying it’s a brilliant signing but he does seem to have some acumen in amateur scouting and development. I’m not absolutely clear on his new role but it sounds like he has been assigned the task of finding the next Conor Sheary. We can never be sure but this might be an astute acquisition based on his skill set. Can we have a conversation about it? Hope so.

Chances are these men return to their former teams, but I can see the Oilers plucking a player from this group late in free agency. Shocked to my shoes Markov is still out there, there have been dozens of inferior blue signed since July 1 and this guy is still waiting? That’s crazy. Daniel Winnik also remains available, one of my favorite players. Best goalie available? Probably Jhonas Enroth.

Congratulations to all who are responsible for the Puck IQ site and really there should be equal acclaim here. The numbers are sweet music, but so is the navigation and it appears the site was ready for us to ascend upon it like a pack of hungry coyotes. Well done men! Now, let’s throw this giant ball of oil out the window!

We’ll learn these metrics together, unless you are ahead of me then screw you for making me remedial. Here are Oilers forwards from 2016-17 (over 100 minutes) against elite opposition. The first column is percentage of overall time-on-ice against elites, showing RNH played the most (as a percentage of his own icetime) against the toughs. Elite TOI explains itself, the top six F’s are clear based on these numbers. DFF is Dangerous Fenwick, share of playing field against the elites, showing McDavid rocking everyone’s world and Jordan Eberle sailing strong. Rel (or what I understand as Rel) shows four men in the black, Nuge in the red (suggesting he cannot thrive with 42 percent against elites) and the youngsters where we should have predicted they would be based on youth and inexperience.

A couple more things: Ryan Strome is (from left to right) 29.0 percent, 235.02 time on ice, 41.10 DFF and -3.20 Rel. Closest match on the Oilers board? Zack Kassian. Also, when the boys get the wowys we should look for pockets of opportunity at all three levels (elite, middle, gritensity). We may find that Letestu-Kassian are do do do looking out my back door and a worthy fourth-line duet. Puck IQ info is here.

Connor McDavid’s $13.25M times eight deal should be coming down the pipe later this week. It’s already having an impact and means the top end talent is going to get paid beginning with the second contract. I am no expert, but Peter Chiarelli may want to get Leon signed earlier than late, because some of these deals are going to be monstrous. These two deals are for foundation players, and that means the next deals are going to be easier in 2018 and 2019. At this point, I expect we’ll see Leon come in around $9 million, Nuge traded and veteran free agents signing for $1 million all over the land. The world as we know it is changing. Pray for Chiarelli. Light a candle. Do it.

LOTS OF INTEL, WHAT DOES IT ALL MEAN?

165 Responses to "STANDING BENEATH THE MARQUEE MOON"