Mrs. Lowetide shops every aisle. Even if she’s getting five items, that’s how she does it. Drives me looney. If you have five items, you strategically map out the most efficient route and then deploy! No sir. She starts in produce and finishes in dairy. Both Mrs. Lowetide and me would have difficulty with the Peter Chiarelli shopping plan. He appears to be avoiding the main store altogether, preferring to hit the roll-end shops and Taber corn trucks. There are clear needs on this team (RH second pairing, first-person shooter) but the Oilers aren’t in on free agency at this time.

JESSE, ANTON, JUJHAR AND THE DRAKE

As mentioned in yesterday’s post, it is fairly clear the Oilers are devoted to the youngsters on each wing. LW’s Drake Caggiula and Jujhar Khaira, along with RW’s Jesse Puljujarvi and Anton Slepyshev, represent 50 percent of a starting eight wingers. If they all make the opening night lineup, there’ll be no place to hide. The hope is these men gain experience and are able to play at pace. Certainly Caggiula and Slepyshev performed well down the stretch in the playoffs this spring.

Once Connor McDavid and Leon Draisaitl are signed, perhaps there will be money for a veteran winger. I wonder if the Oilers will prefer to give the young wingers a full shot, say through the end of December, to find their way? We did see some chem with Drake Caggiula on 97’s wing, and with Lucic-Draisaitl-Slepyshev during the playoffs. What about Puljujarvi? Perhaps on a line with Patrick Maroon and the Nuge. 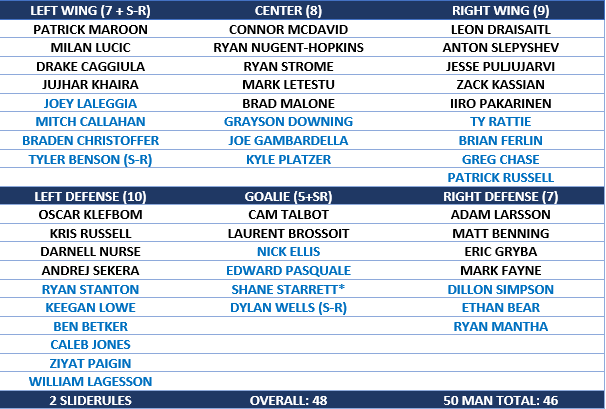 Rob Tychkowski has an excellent update on Tyler Benson, he’s skating and at orientation camp but they are taking it slow. The sequence of injuries according to the article was:

Lots in there, make sure to read it. I didn’t include the quotes from Benson and Rick Carriere, they are vital to the article. Benson remains a substantial prospect but a strong final season in junior would be a Godsend. 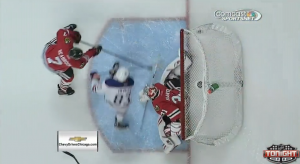 In 2005-06, the last time Edmonton made it to the SCF’s, there were six value contracts. Here they are in alpha order:

That was a tremendous cluster of young talent, and Mr. Hemsky is still going. He caused quite a stir yesterday among Oilers fans who didn’t realize they still loved him. At Lowetide, we have always kept a light on, would have been fabulous to see him here. Here are my nominees for value contracts in 2016-17 (need six):

I have seven names but not all of these will be value deals. Mark Letestu was a value deal last season, could be again. I have a feeling Ryan Strome and or Jesse Puljujarvi might grab some of that 5×4 time. Zack Kassian could also be a value deal. Cam Talbot, too.

We had a chat last night about the McDavid contract, a growing number of people who comment here believe 97’s next contract will make it impossible to win Stanley. I would argue the exact opposite: McDavid’s presence alone makes all of the next seasons possible Destination Stanley. Peter Chiarelli’s job is easier than, say, Doug Wilson’s, just because 97. I am absolutely convinced this is true. What can PC do in order to make this team succeed? One way is to find value contracts.

It’s going to be a long summer, methinks. Leon Draisaitl and the Edmonton Oilers may be as much as $2 million apart according to reports. If that was true, you could meet in the middle ($8.5 million) and call it a day. This looks like an aggressive agent finding a proud and determined young hockey player, and it’s Thelma & Louise final scene, balls out serious. I cannot tell you how many times I’ve seen this, only that it rarely ever ends well.

We can agree that $9 million is too much and that $7 million is at least somewhat acceptable on an eight-year deal. This should get done, but it takes two sides willing and we’re not there yet. Is Germany in the Olympics? If PC pays Leon $9 million times eight, we’re looking at a new world order in terms of salaries given out to young players. Veterans will get screwed, the deals signed by Edmonton earlier in the summer (Russell) instantly an albatross. The agent is attempting to change the market, in an effort to slice the money pie in a different way. In a way, the Oilers and their negotiations with Leon Draisaitl may set the stage for the biggest change in the weather this century. The big money may be gone for even good NHL players by the time they reach 30 if this deal happens.

I’d say quietly shop him but how is that possible?

Ridiculous he’s still out there, wonder if he would be willing to take a one-year deal with the Oilers. PC could use the Andrej Sekera LTIR money on him, slow play Sekera’s return to make the cap work. Thoughts?

We’re back in action this morning at 10, TSN1260. Scheduled to appear: