The Puck IQ numbers are going to offer us real insight into the Edmonton Oilers (and the rest of the league). I posted Edmonton’s 2016-17 forwards against elites the other day and here are the defenders.

I don’t really know anything about goalies but that’s a solid scouting report that gives us something to think about in regards to Skinner. Big man, can move efficiently. Sounds like a very good bet.

Lots of lively debate about Connor McDavid’s contract (not sure if the announcement comes today or later in the week). I ran a few numbers yesterday, wanted to post them here for posterity.

I  believe this to be correct, please let me know if the ciphering needs some tuning.

If we’re going to debate these things, very important to get things level before we begin to apply nail to wood. Connor McDavid’s contract, within the context of his only comparable, appears to favor the Oilers by some margin. The extra four years of the deal hold sway. 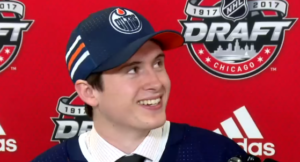 Got a DM yesterday telling me Bob talked about Yamamoto pushing for playing time this fall. As we have discussed since draft day, the age gap between this young man and Jesse Puljujarvi is spring-to-summer. If we go back to 2010 and run the NHLE’s for Edmonton’s first round picks:

Important to note that Puljujarvi is the only man on this list to play pro hockey in his draft year, but the Yamamoto number shines like a diamond. Among No. 1 overall picks and top-five selections, he hangs in with all but McDavid and Hall. Impressive. By the way, Rob Vollman’s NHLE numbers have been tweaked and are here. You will hear people talk about Yamamoto’s size and burning a year of his entry-level deal and I understand it. The play here is to send him back, just as it was with Sam Gagner and Leon Draisaitl and all the others. If we’re honest, it’s possible. David Pastrnak spent 44 games in the NHL year after draft, in case you’re wondering if Peter Chiarelli’s Bruins did it when he was there.

Oilers twitter and various other spots are alive with the sound or Jagr, of Iginla, and now apparently Shane Doan. I wonder. Doan didn’t penalty kill at all last season, that would be one area where the Oilers might be looking for help (Malone may win a job because of it). Among the three veteran RW’s, Doan probably has the best chance of being an Oiler. Suspect all three men are long shots, I remain a devotee of Jaromir Jagr’s artistry and would love to see him spend a year in our town.

A busy morning, TSN1260 beginning at 10 this morning. Scheduled to appear:

WHISPERING PINES, RISING OF THE TIDE