As the trade deadline approached in 2011, Peter Chiarelli was on the lookout for veteran help. He wanted a two-way forward with enough utility to play special teams, win faceoffs and chip in a little offensively. Boston also needed a power-play quarterback and the back of the defensive depth chart was leaking. Further, the Bruins needed someone to ignite the offense and get the bottom 6F’s headed in a good direction.

WHAT TO DO WITH THE MONEY

The Edmonton Oilers have money and will have enough to add a substantial piece in the days after signing Leon Draisaitl. Chiarelli is in good shape for an offer sheet for Leon and could come out of that negotiation with $5 million+ to spend on a player(s) before opening night.

You can’t tell much from a highlight reel, but the Oilers most recent draft was impressive in Jasper last night in the Billy Moores Cup. Stuart Skinner drew good reviews, Kirill Maksimov showed good hands in scoring a hat-trick, and both Kailer Yamamoto and Ostap Safin scored twice. Encouraging results for an organization that is in dire need of scoring wingers. 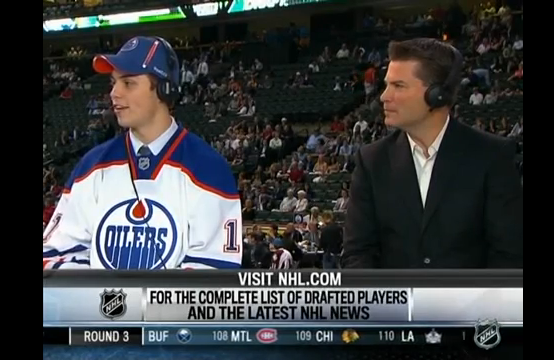 The arbitration process this summer is a little off. Leon Draisaitl’s contract negotiations could stretch out to August and beyond, Joey Laleggia filed and Dillon Simpson did not file. Bogdan Yakimov is not a roster player, although Edmonton retains his rights. I have both minor leaguers as early callup options for 2017-18, still a little nonplussed about the Laleggia filing.

WHAT ABOUT NEXT YEAR’S FREE AGENTS?

A lot of talk about cap hell coming next year for Peter Chiarelli but I don’t see it that way. This season will be a lot about moving parts and next summer probably brings some goodbyes. Let’s have a look at the projected free agents.

Yesterday’s signing means the Edmonton Oilers will be Stanley Cup contenders from now through the middle of the 2020’s, possibly beyond. Important to make good personnel decisions and be strong in procurement, but 97’s presence gives the Oilers a fantastic edge. Yesterday’s news was a massive step for an organization trying to go from perennial loser to Stanley Cup champion. No negotiation this century could have had the same impact.

Speeds over at The Hockey Symposium has a post up that mentions the McDavid contract but focuses on the anticipated deal for Leon Draisaitl. Well worth the read (the first of three by speeds).

A busy morning with plenty of Oilers chatter. We get underway at 10, TSN1260. Scheduled to appear:

145 Responses to "A SATISFIED MIND"