It’s down to Leon. As each day passes without an offer sheet (Carolina, New Jersey, Nashville and Arizona could still do it), the Draisaitl side must come to grips with the idea that negotiation is once again necessary. Unless an offer sheet comes calling, or one side decides to move in order to close the gap in AAV ask, we are probably going to be talking about a bridge deal.

I’m just getting started on the RE projections, it’s an interesting process that shows areas of strengths and weakness on the roster. As you see below, this team badly needs a couple of these RW’s to emerge as scorers and there’s work to do on defense.

One thing we can probably begin to discuss is the Nuge exit. Adding Jokinen (who can play center) gives PC a chance to make a move should a Justin Faulk or Tyson Barrie shake loose. The Russell signing complicates things moving forward, but we may see some movement anyway next summer when the Benning and Nurse renewals come into view. It may come down to asking Andrej Sekera to waive his no move or dealing Darnell Nurse in 2018.

Jesse Puljujarvi could benefit from another 30 games in Bakersfield but the actions of management this summer suggest he’ll go into camp with a job to lose. Added to Anton Slepyshev and Drake Caggiula, that’s three players who could play top 9F for much of the season who we really don’t know about offensively. Ryan Strome’s experience gives him a big advantage over the rest of this group. Would Jaromir Jagr help the situation? Absolutely. That said, just because all these kids have arrived at the same time doesn’t mean the Oilers can afford to make a rash decision. I honestly don’t know who is going to emerge from this group as the goal-scorer and that may mean none of them do and we’re back talking about this again summer 2018. 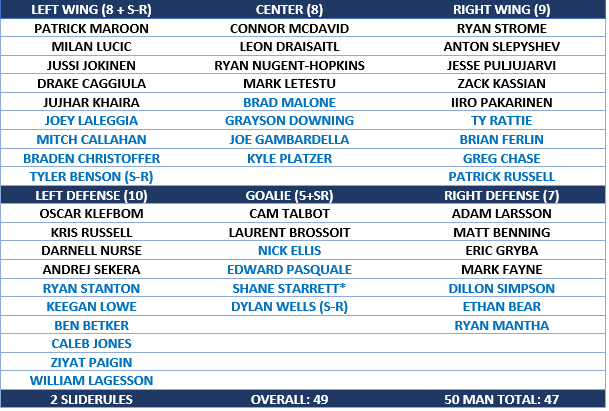 Former Oilers winger will join me this afternooon at 2:20 on SSE to discuss Dave Semenko and his passing. We’ll also spend some time looking back on Connor’s career, he was a very high pick and a power forward who had some exceptional years in the WHA.

Who Will Take My Dreams Away

85 Responses to "THE SEASON AHEAD"