No matter the AAV or the length of his next contract, the Edmonton Oilers are going to need big production from Leon Draisaitl. One of the things we’re all wondering about (aside from the cap number) is what the big forward can do with a line of his own. Can you push the river, Leon?

This is a little unfair, Draisaitl played just 160 minutes without Hall during the 2015-16 season. Draisaitl and Hall had real chem, although a long cool run later in the season caved their overall totals together. Still, a very successful first full season for LD.

Crazy as it looks, Draisaitl had slightly better offensive numbers with Hall in 2015-16 than with 97 this past season. Why does this matter? Doesn’t really, but in doing the RE for the coming season I’m trying to handicap Leon’s minutes. If we give him the same number of power-play and PK points as a year ago, and run him solo center, what is the general area of reasonable for Leon sans McDavid in 2017-18?

That’s fine production for a 2line C (would have ranked No. 15 among C’s a year ago) and if he can win the possession battle with (say) Milan Lucic and Anton Slepyshev, Edmonton should consider that a raging success. Question: Is that good enough for $8 million times eight years? Or do you stick him with McDavid and push for 85 points?

Bigger question: If you run McDavid and Leon together, and Nuge has a successful year on the 2line, is there a way  to move heaven and hell in the NHL to keep RNH past 2017-18? 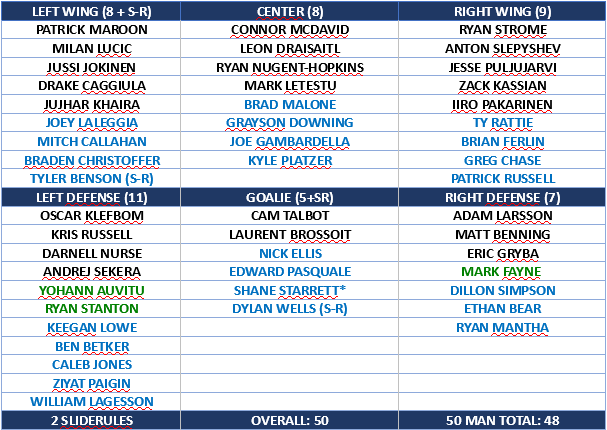 Do you remember our long conversations about these three college defenders back in the day? Cody Wild may well have been the most talented offensively, but too much chaos without the puck limited his progress. Taylor Chorney was too small to play a feature role and arrived in Edmonton during a time of addling, so took the long route to the NHL  (now at 141 games). Jeff Petry was the winning lottery number of the trio, he blossomed into a solid NHL player (now at 445 games).

I wrote about four new hires for the AHL team (Ethan Bear, Caleb Jones, Ziyat Paigin, Ryan Mantha) over at ON last night, this is going to be a very interesting follow for the coming year. There aren’t going to be enough at-bats for all four men, meaning someone is going to sit and possibly see time in the ECHL (Wichita!).

These defensemen are going to have lots of time to make the adjustment to AHL play, makes me wonder which of them will push for NHL time first. No hurry, which makes the current experiment far different than the college trio of years ago.

His spike in goal-scoring in the AHL is an underrated portion of the Oilers season (prospects division). From Boxing Day forward, he went 43gp, 18-13-31. Moved to wing from defense and kick-started his career.

In looking at Laleggia’s progression, I’m reminded of just how difficult it can be to track college men. Each spring I do a “Farm Workers” post and mention this area of procurement:

College players are such a different group, they deserve their own category. Rob Vollman has done some impressive work on NHLE’s, but one of the main areas of innovation was applying different numbers for various NCAA divisions. Playing in the NCHC is far different than playing in another division. Which brings us back to Gambardella. 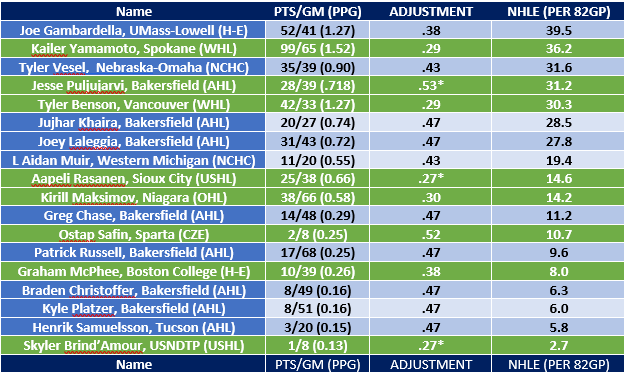 I don’t know that Joe Gambardella takes training camp by storm and  pushes his way into the conversation, but the things we track with math are speaking volumes about this player. Drake Caggiula’s NHLE (44) a year ago isn’t far removed from Gambardella’s season run through the Vollman NHLE.

The wide world of sports this morning at 10, TSN1260. Scheduled to appear:

Song of the Orphans