This is the time of year when I take the estimated TOI for Oilers 2017-18 and marry it to performance. You saw some of that in our discussion about Leon Draisaitl yesterday. I find it fun to do, gives me a chance to project next season and see what I can see.

When it comes to Ryan Strome, I can’t project him well. His numbers don’t make sense to me, there’s no distinction in any area, nothing rhymes. He played the minutes, he scored, but there’s not a lot to identify him in the numbers.

I’ve been reading a few comments lately about Darnell Nurse as the most logical player to step into the top 4D next season. As Puck IQ shows, Matt Benning is clearly the better option based on last season’s numbers. Now, we should be aware that young players can surprise you (good and bad) but the first option should be Benning. 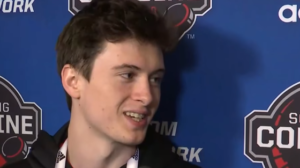 I’ve written about the possibility of Yamamoto making the team several times, often get reactions like “why don’t you just be patient?” or “do you seriously believe they would do that?” from readers. First, my preference isn’t really the point. We’re talking about this player and the Oilers organization. The team has been brazen over the last decade in sending kids to the NHL right out of the box. I know this young man is small, but he has terrific speed, something Sam Gagner wasn’t gifted with when the organization gave him a push fall 2007. Taking into account skill set, team need, franchise proclivity, I think there’s a chance this happens.

I wrote this five days ago, but have been asked about it overnight so will re-publish the free agent list for 2018 summer. Some of these men will get signed but a lot will be spending their final winter in Edmonton.

what’s going on with the draisaitl contract situation? https://t.co/9AJPD4ONgu pic.twitter.com/Yycg4BM8is

It will have to happen soon if it is going to happen at all. Arizona? No. Nashville? Unlikely. New Jersey? Carolina? Capgeek numbers here.

THE OILERS AND THE KINGDOM OF SWEDEN (2017 DRAFT)