Later today, I’ll begin the RE series for 2017-18. It will begin with Connor McDavid, who I am projecting to lead the team in scoring again. That’s your first bit of ‘breaking news’ on the RE, although it’s the ultimate no-brainer. I’m not going to tell you how the final RE breaks down in terms of goal differential, but will say this is a very different season to come.

My RE projections have some career seasons, and a lot of players ending up in the same spot on the graph. Why? It’s difficult to know which of the kids are going to spike, so they are all in a row and the veterans pass them because their roster spots are more assured. I’ll probably run four or five a week and hope to be done by end August.

For me, the key to this season will come on the 5×5. I’m fairly confident the power play will outscore the penalty kill failures, and even strength is the big piece of game state. Edmonton finished No. 8 in 5×5 goals (165) and No. 9 in goals against (139) during 2016-17. In 5×5 goal differential, the Oilers finished No. 6 with a 54.3 goals-for percentage. Can the team improve on that?

I have six rookies playing at least one game, but none of them playing more than 20. It’s a more veteran group than we’ve seen in many years. Is the team better than a year ago?

I am not projecting three scoring  lines, but the inability to identify a winner among Jesse Puljujarvi, Anton Slepyshev and Drake Caggiula produces nine forwards with 10 or more goals. This past season had just seven. This year, there are nine, but the biggest reason is that indecision among the young forwards. 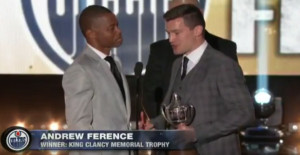 Not exactly news but Andrew Ference retired yesterday. It’s too bad Ference was unable to play at peak levels during his time in Edmonton. I got to enjoy watching him as part of the Boston Bruins Stanley Cup team in 2011, enjoyed that playoff run immensely. Ference is not your typical Albertan, or Edmontonian, or eighth-round pick. He had a fine career, got everything possible out of his abilities. Sail on, Sherwood Park Flyer, Sherwood Park Met, Portland Winterhawk. 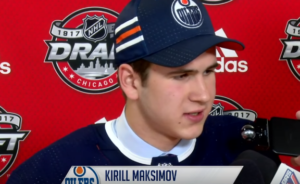 My RE pushes Nugent-Hopkins numbers a little and that may bring a dilemma for Peter Chiarelli next summer. The general manager will have boxed himself in by then, with McDavid’s deal kicking in and Leon grabbing a major slice of the cap. Nuge’s $6 million deal makes him vulnerable to trade but there are ways around it.

These are not ideal and I’m pretty sure we’re going to see Nuge’s his red tail lights heading for Spain in the next 12 months.

We’re several weeks from knowing but it’s fun to have a look to see what we can see out among the remaining free agents. The Oilers are now a “have” team, so there may be significance to the names. A year ago, Kris Versteeg and Eric Gryba were among the invites and Edmonton grabbed Kris Russell late in camp. The 2016 TC list is here.

Among the current free agents I would like to see in Edmonton for training camp:

A busy Friday, as we head to the weekend with lots going on. TSN1260, 10 this morning, scheduled to appear: