The 50-man set (save for Leon) we can talk about the jobs available and where the new recruits may land. Jussi Jokinen and Yohann Auvitu should play large roles, but is there anyone else? How many jobs are spoken for?

THE SURE THINGS ENTERING CAMP 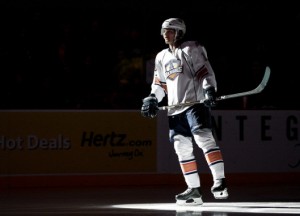 Todd Nelson’s first rookie crew did pretty damn well if you ask me—all of them played in the NHL. Jeff Petry (445 NHL games) is a bona fide NHL defenseman, Chris VandeVelde (278), Mark Arcobello (139), Teemu Hartikainen (52) Colten Teubert (24), Phil Cornet (2) and Milan Kytnar (1) all saw playing time in the world’s best league. Petry is among the real success stories for this organization over the last dozen years of drafting. No current Oilers here.

This group wasn’t as strong as year one, but Tyler Pitlick (58 NHL games) and Curtis Hamilton (1) did see some time. None of these players is currently part of the Oilers organization.

Nelson was back to delivering considerable talent to the Oilers after one down year. Justin Schultz (344 NHL games), Anton Lander (215), Martin Marincin (175), Brandon Davidson (101) and Taylor Fedun (39) have NHL time and all played in the NHL last year. No player from this list is an Oiler now.

Oscar Klefbom (189 NHL games) looks like a decade plus defensive option and a big fly in draft and development. Andrew Miller (15), David Musil (4) and Tyler Bunz (1) also appeared in the NHL. Klefbom is the only name still a part of the NHL organization.

The final Barons season. Among the group who have played in the NHL: Jordan Oesterle (25 NHL games), Jujhar Khaira (25), Laurent Brossoit (14), Connor Jones (4), Dillon Simpson (3), Bogdan Yakimov (1). It seems unfair that Connor Jones has played in the NHL and Kellen has not, that is not the way it should go. Khaira, Brossoit, Simpson and Yakimov are still associated with the Oilers.

The first Condors season saw Leon Draisaitl and Darnell Nurse get a cup of coffee before heading to the NHL for the next 15 years. Condors rookies from year one: Anton Slepyshev (52 NHL games) played in the big leagues before the AHL, and Laleggia did receive a paper recall to the show. All but Roy and Laurikainen are with the organization.

Jesse Puljujarvi (28 NHL games) will probably be the biggest name to play for the Condors as a rookie for many many years. Nick Ellis is the other rookie I believe will have something to say in the coming years.

The Colorado Avalanche continue their ‘opposite George’ plan this summer with word that draft pick (and Hobey Baker winner) Will Butcher will be headed to free agency on August 15 instead of signing with the team. Source is Mike Chambers from The Denver Post. Butcher’s NHLE (28.9 points) is a handsome number for a defenseman.

Butcher is a lefty, so the Oilers have the position covered if not the player-type. Butcher is from Wisconsin, that usually means an American NHL team has the edge in procurement. At the very least an interesting name to keep in mind.

Do you prefer the RE to run in the morning or at night time? I received a massive spike in visits after 5pm and the Lucic post yesterday. Historically, you prefer the hockey news in morning and the projection post in the evening, but I want to make sure. Please let me know.

NOT A SQUARE TO SPARE