In figuring out reasonable for my summer RE’s, one item came through when it comes to goalies: Peter Chiarelli has been making good bets. From the trades for Cam Talbot and Anders Nilsson, to the signing of college men Nick Ellis and Shane Starrett and the drafting of Dylan Wells and Stuart Skinner, Chiarelli has been strong on goalie procurement—the only clunker being seven games of Jonas Gustavsson.

The big question for the Oilers in regard to the goaltending surrounds Cam Talbot’s next contract. He has two more seasons on his current deal (AAV $4,166,667) and will be 32 when he hits free agency. If Talbot posts two more seasons like the one we’ve just seen, his ask in the next contract probably takes him away from Edmonton ala Curtis Joseph in 1998.

Is there a goalie in the system who can replace Talbot as starter? Don’t know. One thing I do like: All of the men listed above have good boxcars over a reasonable period of time. I read a lot of worry about Laurent Brossoit but his career AHL numbers (115gp, 2.72 .914) suggest he has earned a chance at the backup job.

That is some pretty solid netminding across the board, beginning with Talbot, who I think we can say posted one of the 10 best goalie seasons in the NHL 2016-17. Oilers need only one of these youngsters to turn out, but Talbot has just two years left on his deal. Brossoit is first man up, followed by Ellis. 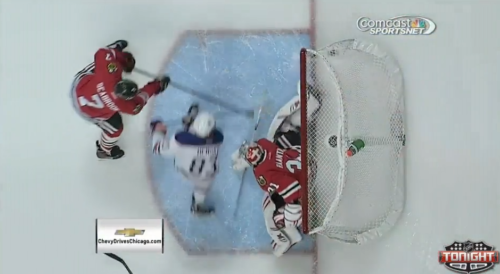 This is the Pat Quinn team, opening night. Lordy. Lubo on third pair, Gagner centering Moreau and Stortini on the 4line, Jacques instead of Penner on the top line. Ales Hemsky played 22 games and posted 22 points, on this team that’s incredible. Dustin Penner played all year and scored 32 goals. Lubo got himself traded, I felt so bad for how his Oiler career ended up, that guy could play the hockey.

For some reason, I’ve been receiving several emails in recent days about my stated opinion on a few specific Oilers matters. Let’s begin by reviewing what I said:

As mentioned lots of vitriol headed my way over these comments and even one ‘better delete those posts!’ comment.

I would like to talk to you about having the courage of your convictions. If you believe in something, like power steering or platoon advantage or red potatoes, then if you are a person of character then you must stand by those things even when they become unpopular. When you send me an email suggesting I change my stance, you have to convince me with logic and reason. That’s the job. I did the courtesy of telling you why I believe these things, it’s on you to convince me otherwise.

Taylor Hall could push a river on his own, grab possession authority and produce 5×5 offense pretty much all by his lonesome. This doesn’t mean I believe Adam Larsson is bad, or poor, in fact I thought he had a helluva season. My opinion of the trade hasn’t changed since the day it was made, nor will it, because the things I valued then remain priorities now. I’m not being stubborn in an attempt to piss you off, these are things I believe to be true. Hall’s 5×5 scoring, IPP, possession, all of these numbers are grand, and the return needed to be Max Pacioretty or Matt Duchene. As I write this, I flat out know the comments section will go straight to hell today, but it’s important to reiterate these things from time to time. I won’t change my mind because there is no evidence compelling me to do so. If I changed my mind on your say so, what value would my opinion hold for you?

Kris Russell can defend, just as Eric Gryba can defend. That has value to me and I have stated that Russell’s first season in Edmonton was value. My statement above is in regard to his contract, a $4 million times four-year deal that may end up costing this team Andrej Sekera or Ryan Nugent-Hopkins. You can only have a certain number of $4 million deals, and those contracts (Talbot aside) have to bring at least some offense. Russell can defend, I see what value he brings, but for me the contract is too dear.

My Milan Lucic comment received by far the most reaction, and I think it’s probably a misunderstanding. I didn’t suggest the Oilers should buy out Lucic, but did say two other things. First, if he has another season of 5×5 scoring like he did a year ago, we’ll be talking buyout. I know this is true because I know you as a group. The second thing I said seems to have been missed by many of you: but that’s not realistic.  Edmonton can’t buy out the Lucic deal next summer, can’t happen. So, when you email me “your Lucic buy out idea is a deliberate attempt to enrage readers” I can’t take it seriously because that isn’t what the written words implied at the time.

If you say to me “your Hall take is bad because the Oilers scored 103 points without him” we can’t really have a conversation beyond surface waves to each other as we travel in different direction. Nuance. Courage of your convictions. Understanding what is valuable and what is less valuable. We have to agree on these things, at least to some extent, or we are Tower of Babel. Please tell me why I’m wrong on my Kris Russell take, please and thanks. Otherwise, I’m going to assume we speak different languages.