If I use the big part of my brain—the area devoted to Bobby Orr’s goals, Natalie Wood in Bob & Carol & Ted & Alice, the Allmans, and demon liquor—it shouldn’t be too hard to guess most of the Oilers opening night roster. Folly would be also guessing the Bakersfield 23 and the Wichita Extra Guys. 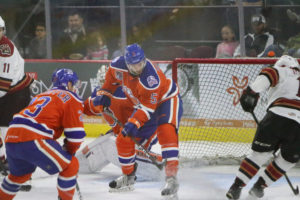 There are seven men on the current 50-man roster—that is 14 percent, for the math challenged—who (in my estimation) have no chance of playing in an NHL game this coming season. That is no big deal—unless this is your third year of pro hockey and final one on an entry-level deal. If that is the case, then the chances of getting another deal at the end of the entry deal could be in doubt. Here is the list of players for whom I cannot see a pathway to the majors this winter.

WHAT WILL AUGUST BRING?

We’re most of the way through the story of summer, with the big additions being Ryan Strome, Jussi Jokinen and Kailer Yamamoto. It feels like there are more things to come, and Leon Draisaitl’s signing (eventually) may in fact ignite a free-agent signing or (more likely) a trade.

There are things we don’t know (Sekera’s ETA) and things we do (Oilers are committed to kids on RW) and question marks along with astute additions. I keep wanting Peter Chiarelli to be aggressive in finding things (like his Torey Krug or his Nathan Horton) but he appears to be looking for internal solutions all down the line.

Can the Edmonton Oilers win the Stanley Cup with this team? My answer is there are too many question marks, too many unproven youngsters in major roles, to consider this team a strong SC contender.

I think Peter Chiarelli wasn’t ready for his team to be ready this past spring, and his solution seems to be preparedness for a stronger trade deadline. It’s a strange plan of attack but perhaps there is a trade target who will only come available after another failed season. We wait.

A fun show this morning as we dig into all manner of stories with an accomplished group of guests. 10 this morning, TSN1260, scheduled to appear:

74 Responses to "AUGUST AND EVERYTHING AFTER"