For many years now, the Oilers have promoted AHL veterans and graduating college kids into prominent minor league roles, while slow-playing the drafted kids who have turned pro. Believe me, it is a thing.

I do not blame the coaching staffs—their job is to develop but also deliver a competitive team—but Keith Gretzky has a big job in getting more prospect forwards from entry-level pro to NHL success. That is not to say all of the issues that plague Edmonton’s draft and development system can be blamed on slow-playing the drafted kids. Why? You have to draft well enough to have players to sign and play in prominent positions age 20.

The Oilers signed exactly ZERO forwards from their own draft pool this summer. Edmonton signed no forward from the 2013 (Aidan Muir, Evan Campbell), 2014 (Tyler Vesel), 2015 (McDavid only forward) or 2016 (Benson already signed, McPhee and Rasanen in college this fall) drafts over the summer who can play in the AHL this fall. Joe Gambardella is the big name heading to training camp with Bakersfield in his future.

Someday soon, the Oilers will have a drafted forward turn pro (Tyler Benson is in the pipeline) and it’s important to play him out of the box. Six years ago, I wrote this about Curtis Hamilton when he was a rookie pro:

I’ve been ranting and raving about this for so long it’s certain you’ve tuned out, but it’s important. Kids need to play in the AHL age 20—and the Oilers draft and deployment suggests they have (in the past) chosen players incapable of doing same. Kyle Platzer was a third-round selection but two years later he isn’t an AHL regular. If it isn’t deployment, it’s the drafting, there is no neutral ground.

Using Prospect-Stats.com and their Quality of Team metric, I counted up the first 408 games for Bakersfield and San Jose Barracuda (won the division) forwards and placed them in veterans/prospect categories. The 408 games measure is important, that represents six forwards who would play on the top two forward lines for each team.

One thing I’ll say about this past season in support of Gerry Fleming: He played the prospects who moved the needle offensively. Puljujarvi received playing time with Anton Lander and Josh Currie as his centers, Jujhar Khaira being the other noteworthy pivot. Fleming needs more talented prospects, that’s my takeaway. However, there’s also an argument that Kyle Platzer would be farther along if the Oilers placed him in the lineup every night. 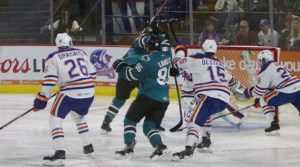 San Jose basically runs an AHL team of younger players who are NHL-ready or damned close, none of whom is far from their entry level deal. It will take years for the Oilers to get there, but this has to be the goal. I know the Patrick Russell signing doesn’t look sexy, but signing college men until Tyler Benson pushes them out is the right thing to do. More Gambardella’s!

File this under “things I never thought anyone would think of, but an article from Wil Tomer at FanSided discusses Leon Draisaitl to the Pittsburgh Penguins. The club has $3.28 million in cap space, so an offer sheet is out of the question. I don’t see any player making large coin who is a candidate for LTIR, and the only player that makes sense based on cap is Phil Kessel. I don’t think that’s a trade Edmonton would make even if Phil the Thrill set aside his NMC. I think we’re safe in saying this is several miles past mission impossible.

Haggarty’s article is an interesting one, recommended reading. I think there’s a tendency to undervalue Kailer Yamamoto as a prospect due to size but that’s unfair to the player. Kailer Yamamoto is a very impressive offensive prospect and we are probably looking at a fabulous 1-2 tandem on RW by the end of the decade (Jesse Puljujarvi and Kailer Yamamoto). Who plays with McDavid? Who plays with Leon?

Burda was Euro scout beginning in time for the 2005 draft. During his tenure with the Sens, he was or may have been helpful in the procurement of Erik Karlsson, Jakob Silfverberg, Robin Lehner, Mika Zibanejad, Andreas Englund. I’m heartened by the hiring, would like to see more additions to Euro pro scouting (the Lenny Petrell wing of the scouting staff). I do think Chiarelli has done a fine job on the scouting side, Edmonton has been drafting well and the template seems to be targeted toward home runs.

PRONMAN ON THE PICKS